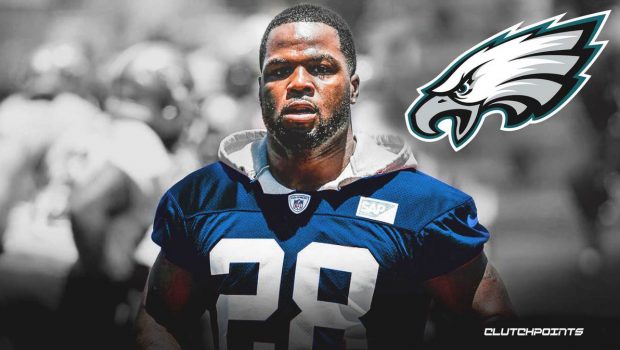 Carlos Hyde is coming off of one of the best seasons of his NFL career, but he’s still available on the free-agent market.

But perhaps not for long.

According to NFL insider Adam Caplan, the Eagles have expressed interest in signing Hyde.

The Eagles re-signed fellow running back Corey Clement to for some depth behind Miles Sanders late last month, but it seems that the club would also like to add another veteran halfback to its stable.

Hyde spent the 2019-20 campaign with the Houston Texans, playing in every game and racking up a career-high 1,070 yards on the ground to go along with six touchdowns. He averaged 4.4 yards per carry.

The 29-year-old, who played his collegiate football at Ohio State, was originally selected by the San Francisco 49ers in the second round (57th pick overall) of the 2014 NFL Draft.

Hyde spent the first four years of his career with the 49ers, carving out a prominent role by his third season when he totaled 988 yards and six scores as a rusher, logging 4.6 yards per attempt. The following year, he registered 938 yards and eight touchdowns on the ground while also hauling in 59 receptions for 350 yards.

After his tenure in San Francisco, Hyde signed a three-year deal with the Cleveland Browns, but only made it halfway through his first season with the team in 2018 before being traded to the Jacksonville Jaguars.

In 14 games between the Browns and the Jaguars that year, Hyde accumulated 571 yards and five scores, recording a meager 3.3 yards per tote.