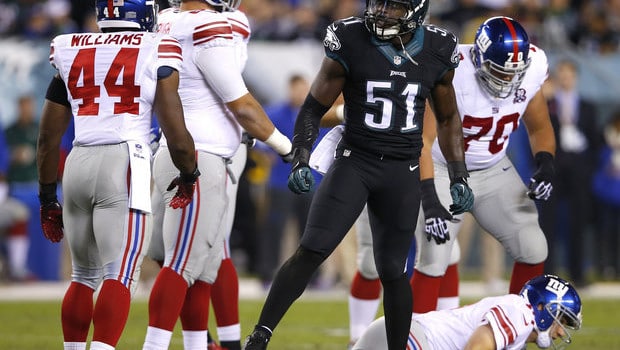 EAGLES REPLACE JORDAN HICKS — OUT FOR SEASON — WITH ACHO

It didn’t take long for the Eagles to replace great rookie linebacker Jordan Hicks who was placed on injured reserve with a torn pectoral muscle, suffered in Sunday night’s 33-27 win over Dallas, that ended his season.

Back to the fold comes inside linebacker Emmanual Acho (above).

Acho suffered a thumb injury that required surgery, and he was waived with an injury settlement in August.

Last season, Acho appeared in 14 games with the Eagles contributing both as a reserve linebacker and on special teams.

In his four-year career Acho, 24, has 33 tackles and one stop for loss.

With Hicks’ injury, the Eagles face some question marks at inside linebacker, despite it being one of the deepest positions on the roster.