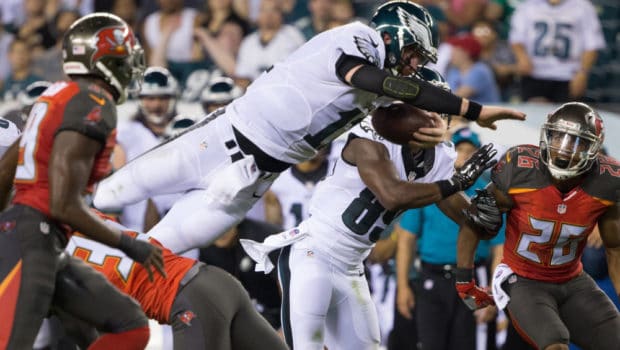 EAGLES’ RECKLESS WENTZ GETS THE BLAME FOR THIS RIB INJURY!

So, Carson Wentz got hurt in the Eagles’ first meaningless exhibition game last Thursday, and no one who has watched the quarterback’s career was surprised.

Wentz was praised for his toughness and willingness to take a big hit. He was commended not just from the fans who desperately wanted to see him play, but from his head coach as well.

“I love his toughness. You saw some of the shots he took tonight. He stood in the pocket and bounced back from some tough hits,”Doug Pederson said after preseason game one versus the Tampa Bay Buccaneers.

When asked about a play where Wentz somersaulted in the air, Pederson said that he “kind of loved it. Wish he would have hurdled the guy instead of taking one in the legs . . . the fact he’d done a lot of that in college, that was a no-brainer for me.”

A few days later, Pederson probably wishes he could have taken some of those words back.

His rookie quarterback is going to lose precious on the field growing time because of a hairline rib fracture. Wentz could miss the entire preseason, which could ultimately mean all of his game action in 2016.

While this injury won’t particularly hurt the Eagles 2016 fortunes, it could have a massive impact on the future of Wentz and his career.

It will be interesting to see where Wentz’s psyche will be when-and-if he actually sees playing time again. He could become tentative, passive, concerned about being injured, and eventually become a shell of himself.

The reason the Eagles moved up to select Wentz with the second overall pick was partly do to his ability to take hits and still accurately deliver the football, as Pederson mentioned in his postgame comments.

That means Wentz will probably not be fazed by this injury and still will not shy away from contact. That could spell a short career if he is not concerned about self preservation.

This isn’t to say there’s anything wrong with showing toughness. After all, in Philadelphia, if you show grit and heart, you’ll own the town. But, this isn’t North Dakota State anymore, and Wentz has already learned, there are big consequences to that toughness – bodily consequences.

It’s respectable that Wentz plays the game like a football player and not just a pre-madonna quarterback, that’s become the norm in the NFL. But the problem is that his coach doesn’t seem to be protecting his player from himself.

Instead, Pederson is almost encouraging the potential recklessness that competitors sometimes have in order to make a big play.

This isn’t about one game or injury. It’s the mentality of both player and coach.

But then again it’s a rookie player and a rookie head coach. Maybe this preseason injury scare will make both Wentz and Pederson think about longevity more as opposed to fighting for the extra yard, down, or even game (especially in the preseason).

Perhaps, this will be a wake up call to both. Because If Pederson wants to last long in his first head coaching gig, he will probably do it with Wentz as his star pupil.

Though, the pupil won’t be around for much longer if he continues to take hits like he did in his first sniff of the NFL.

The question is will Pederson reevaluate his coaching style with Wentz, or are the Eagles in for a career long injury risk at quarterback?