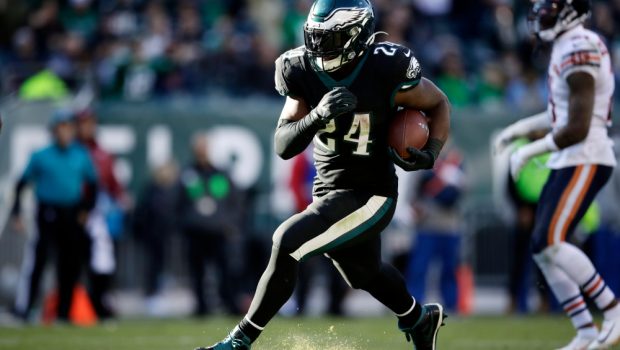 The Eagles are 5-6 and dying for good news.

And they evidently won’t get it about running back Jordan Howard, who has not “regained strength” in his injured shoulder, according to coach Doug Pederson:

“He’ll do individual drills this week and see where he is at the end of the week.”

The 25-year-old powerful rusher has missed the last two games for the Eagles coming off a bye week. Both have been terrible outings for Philly’s offense, which has put up 19 points across the two defeats.

Howard has 119 carries for 525 yards and six rushing touchdowns in nine games this season—his first as a member of the Eagles. In his stead, while recovering from a shoulder “stinger” turned what appears to be worse, the Philly running back corps has been led by rookie rusher Miles Sanders, who is second on the team in rushing yards with 437 in 11 games.

Philly’s lack of ground game has left a hole in its offense, with fourth-year franchise quarterback Carson Wentz, the second overall pick from the 2016 NFL Draft, struggling at just the worst time for the Eagles. With a struggling signal-caller under center along with no competent running game, Philly, at 5-6, is going to need a miracle to sneak into the playoffs this season.

Luckily, the Eagles have a relatively easy schedule for the final five games, matching up against the New York Giants twice, the Washington Redskins, Miami Dolphins, and then the Dallas Cowboys to round out what could be a win-out situation should the pieces come together, like Howard returning healthy.

To try to mitigate Howard’s absence, the Eagles re-signed running back Jay Ajayi the prior week. Despite Howard’s status, the Eagles desperately need some potency in their offensive attack for the remainder of the season.