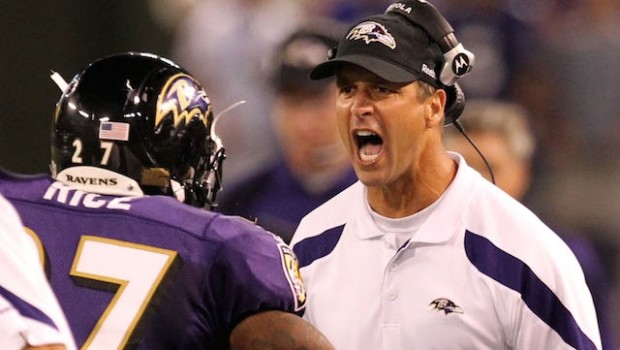 EAGLES-RAVENS JOINT PRACTICE — WILL A BRAWL BREAK OUT?

So, can we expect a brawl to break out when the Eagles and Baltimore Ravens begin joint practices today at the NovaCare complex in anticipation of Saturday night’s preseason game at the Linc?

After all, the Cowboys and Rams degenerated into fisticuffs yesterday, so who knows?

The Ravens are dealing with some lingering injury issues. Wide receiver Breshad Perriman, the team’s first-round pick, had an MRI Monday on the knee he hurt in the first full practice of camp on July 30, an injury that’s sidelined him since.

Coach John Harbaugh (above) said the MRI results were good but offered no timetable for the rookie’s return as the knee remains sprained with some swelling.

The MRI ”came back essentially normal,” Harbaugh said Tuesday. ”It’s just going slower than our doctors anticipated it would, so we wanted to get an MRI and see if there’s something in there that we didn’t know about – and there wasn’t.”

Other notable injury updates include:

– Safety Terrence Brooks came off the physically unable to perform list (PUP) and made it back to practice for the first time. He tore his MCL and ACL in a late-season game with Jacksonville last year, and Harbaugh said the safety had been way ahead on rehab.

– Tight end Dennis Pitta now is the lone player on the PUP list, and Harbaugh said his is a more complex situation. Mid-season might be the time Pitta returns if it all works out.

The Ravens have spent the last few weeks practicing against themselves, and that’s one reason the players and coaches seem to be looking forward to the joint practices in Philly.

”When we can work against other teams, I think it’s better for both sides and for the individuals on the competition side because we’re not seeing our own players all the time,” offensive coordinator Marc Trestman said. ”I’ve been to three or four of these over the years, and I think we always get something positive when both teams are working to try and get better.”

Linebacker Zachary Orr said he is looking at this as a way to kind of gauge where the Ravens are at right now.

”Whenever you can go against another opponent and see how you stack up, it will be great,” Orr said. ”We’re just going up there and trying to get better and improve as a football team.”