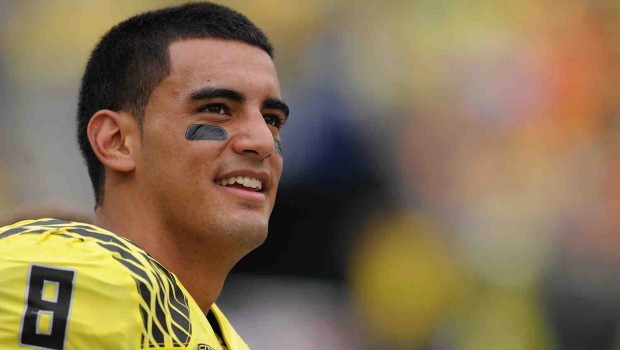 Where will Oregon QB Marcus Mariota end up in the April 30 draft?

Here is my ranking of the most likely landing spots for Mariota, Schein Nine style:

Tennessee has the second overall pick. If the Bucs pass on Mariota, it’s Christmas in April across the Music City!

Now, the Titans — as I’ve documented many times, including last week — are talent-poor and painfully nondescript. They have needs everywhere. I would never call USC defensive linemanLeonard Williams a bad pick. But Mariota is perfect for this team. You just don’t pass on a potential franchise quarterback.

Zach Mettenberger’s been hurt in each of the past two years — during his final season at LSU and his rookie campaign in Tennessee. And while Mettenberger has a big arm and shows flashes of promise, he’s still a former sixth-round pick, not a cat you assuredly build around.

With Tommy Smith having just stepped down from his role as president/CEO, the Titans’ hierarchy is in flux. This franchise could use a dose of stability. Ken Whisenhunt is an offensive guru with an earned reputation for developing quarterbacks.

Don’t overthink it, Titans: Pick Mariota. Unless a team offers a bushel of picks that promises to shape the franchise, you can’t afford to pass on the Oregon product.

Wait, the Redskins are listed second on a list of potential Mariota marriage partners?

If the Titans stay at No. 2 and pass on Mariota, the Jaguars (who pick third) and Raiders (fourth) aren’t taking a quarterback, what with their respective commitments to Blake Bortles and Derek Carr. Jacksonville needs defense, while Oakland needs a receiver — and both need top-flight talent, so they could very much be inclined to stay where they are (as opposed to trading down).

In that scenario, with Mariota still on the board when the No. 5 pick goes on the clock, what would Washington do?

You have to pull the trigger.

Robert Griffin III’s health has been an issue in each of his three NFL seasons. And it’s pretty clear that Jay Gruden, given his words and actions, isn’t RGIII’s No. 1 fan. (To be fair, Griffin hasn’t given the Redskins’ second-year coach much reason to believe in him, with his underwhelming play and shenanigans with the media.)

On Tuesday, new general manager Scot McCloughan said the Redskins wouldn’t rule out taking a QB with the No. 5 pick. Gruden backed this up Wednesday, saying the franchise would have no problem starting over at the position: “If we think it’s worth the risk to hit the reset button, if he’s that good of a football player, if we decide in the building that he’s that good of a football player that we think we should do that, then we should do that.”

Could this all be a smokescreen, an effort to drum up trade interest? Sure. But I refuse to believe this franchise still sees RGIII as the definite long-term answer. Gruden certainly doesn’t have that degree of certitude. And I’ll tell you one thing, Jay: He is that good a football player. It’s worth the risk.

Well, why the heck not?

If the Browns, as NFL Media’s Charley Casserly reported, were willing to give up a first-round pick forSam Bradford (who didn’t play a down last season), then you have to imagine they’d consider Mariota.

Then again, the Browns could sign LeBron to play quarterback. Nothing would really surprise you.

Last year’s first-round pick, Johnny Manziel, is currently undergoing rehabilitation treatment. So despite the fact that the team expects Manziel back for April workouts, his presence on the roster cannot preclude the Browns from considering different options. And Cleveland has the ammunition to make a deal, with two top-20 picks.

Philly just traded for Sam Bradford. But with Chip Kelly, Mariota’s old college coach, apparently wielding full control of theEagles — and scooping up former Ducks at a dizzying pace, by the way — would you really be shocked if he had another surprise up his sleeve?

Yes, Kelly continues to downplay the likelihood of Philly snagging Mariota, but I simply cannot dismiss this possibility until the Heisman Trophy winner ends up on another roster.

I’m completely obsessed with this fit.

I don’t believe the Chargers will deal Philip Rivers, something that’s become a topic of media banter in the last week. But he’s in the last year of his contract and he’s not getting any younger.

I would endorse the Chargers trading multiple picks — potentially from the 2015 and 2016 drafts — to grab their quarterback of the future.

The Eagles and Chargers are listed ahead of the Jets because of the trade possibilities. But if Mariota gets by Tennessee and Washington and nobody trades up, the Jets should take him.

I think new coach Todd Bowles played it right at this week’s meeting in Phoenix, talking up Geno Smith, because I think there’s a very good chance Mariota will come off the board before the Jets pick anyway. And Gang Green does have other needs, too. At No. 6 overall, this team could scoop up an edge rusher, a wide receiver or an offensive tackle.

Personally, I’d undoubtedly snag Mariota if available, but Mike Maccagnan’s board could read differently. And with many needs, could this team be a candidate to trade down?

No, Jay Cutler isn’t going anywhere. John Fox confirmed as much on Wednesday, when he kinda talked up the quarterback.

Recently, new GM Ryan Pace put it best: “We went through the process of thoroughly evaluating the roster and we’re moving forward with Jay as our starting quarterback.”

Here’s my translation of that statement:“Nobody will take this darn contract, so yes, we’re stuck with the modern-day Jeff George.”

With a new coach and new general manager in Chicago, why not begin to groom a new quarterback? I know colleague Daniel Jeremiah feels me. Some think Mariota will need some time to adapt to an NFL offense. Thus, the Bears could look to get some ROI on Cutler while prepping Mariota to eventually take the torch.

When it comes to this offseason, I truly believe Sean Payton and Mickey Loomis when they say they won’t trade Drew Brees. But next year is a different story.

There was a strong rumor last year that New Orleans would find its quarterback of the future in the draft. That didn’t happen. But maybe that chatter was one year premature.

Can you imagine Mariota playing for Payton, putting up video-game numbers? I can.

The Rams just made a fantastic deal, getting Nick Foles in exchange for a quarterback who simply can’t stay on the field. On my SiriusXM Radio show, “Schein on Sports,” GM Les Snead said it was “very unlikely” St. Louis would target a QB early in the draft because the team is committed to Foles. And honestly, Snead seems genuine in that commitment.

But here’s the cold, hard truth: Foles currently has one year left on his contract at $1.5 million. So it’s not like the team is financially tied to him at the hip. And, by the way, Snead also said he would “never say never” on a quarterback.

So you’re telling me there’s a chance …