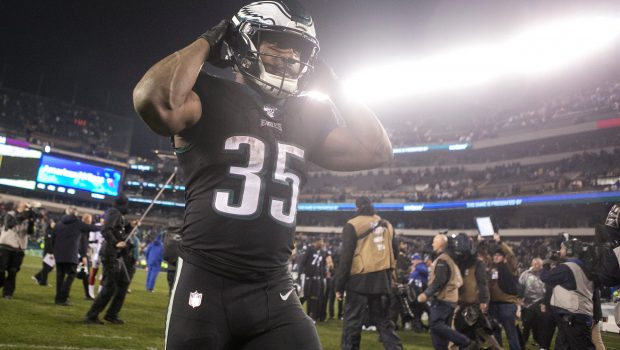 EAGLES RAN TO DAYLIGHT AGAINST COWBOYS, EVEN WITHOUT SANDERS!

The Eagles ran the ball well in beating the Cowboys, getting 119 yards on 26 attempts.

Boston Scott (above) ran for 70 yards on 15 carries and Corey Clement had 24 yards on five rushes, and the Birds hope Miles Sanders returns from his knee injury after the bye. Sanders has 431 yards rushing and an average of 6.1 yards per carry in five games.

Carson Wentz needs to protect the ball better. Not all the turnovers are his fault, but the quarterback ends up getting the bulk of the blame.

Travis Fulgham has been the highlight of the first half for Philly. After being cut four times by three teams since Detroit selected him in the sixth round of the 2019 draft, the wide receiver made his debut with the Eagles in Week 4 and has quickly established himself as a top target. He has 29 receptions for 435 yards and four TDs.