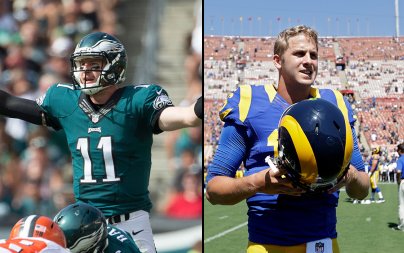 EAGLES-RAMS IS MUCH MORE THAN WENTZ-GOFF, BUT WE CAN’T HELP BUT COMPARE!

Tomorrow’s Eagles-Rams game at the L. A. Coliseum is so much more than a battle of quarterbacks, but it’s hard not to distill it to the Birds’ Carson Wentz and the Rams’ Jared Goff because they were taken 1-2 in the 2016 draft.

Here’s how they compare:

When you factor in Wentz’s contributions on the ground (283 yards), there’s no doubt that Wentz has been better than Goff by standard statistics. But let’s also break them down by more advanced quarterback statistics.

By Football Outsiders’ metrics, Goff has been the league’s fifth-best quarterback. Wentz? Ninth. However, by Pro Football Focus’ passer rating, which takes into account dropped passes, throw aways, spikes, and yards in the air, Wentz leads Goff. He’s ranked seventh while Goff checks in at 14th.

Goff and Wentz are pretty much equals when it comes to deep passing. On passes thrown at least 20 yards downfield, Wentz’s passer rating is 96.7 and Goff’s is 94.2, according to PFF. Wentz has thrown three times more touchdowns on deep passes than Goff (9-3), but Goff has thrown four times fewer interceptions on such passes (1-4). When under pressure, Wentz has been better than Goff, posting an 84.0 passer rating. Goff’s passer rating under duress is 76.5. Both rank in the top-10, according to PFF, and both face pressure at roughly 34-35 percent. So give the slight edge to Wentz, again.

Wentz has been better than Goff this season. There’s no denying that. But if you’re asking who’s seen the biggest improvement, the answer is Goff.

Comparing 2016 to 2017, Goff has seen his completion percentage rise by 7.6 percent, his yards per attempt rise 2.8 yards, his touchdown rate rise 2.7 percent, his interception rate decrease 1.9 percent, and his passer rating rise 34.8 points. Of course, plenty of that has to do with Goff’s god-awful rookie season. Wentz wasn’t as awful as Goff last year, but he was still bad. So, his improvement has also been notable. Wentz’s completion percentage is down 1.7 percent, his yards per attempt is up 1.3 yards, his touchdown rate has risen an absurdly high 4.7 percent, his interception rate has dropped 0.8 percent, and his passer rating has jumped 22.7 percent.

Goff has seen the bigger jump. There’s no doubting that. People were already writing him off a year ago. Now, he’s played strongly enough to sneak his way onto our staff MVP ballot.&nbsp;

Still, at this point, it’s safe to say Wentz has been better. But I will mention this: Wentz’s numbers are bound to regress in the next year. That’s not because Wentz is actually a bad quarterback in disguise — he’s really damn good! — it’s entirely because of his touchdown rate, which is unsustainable.