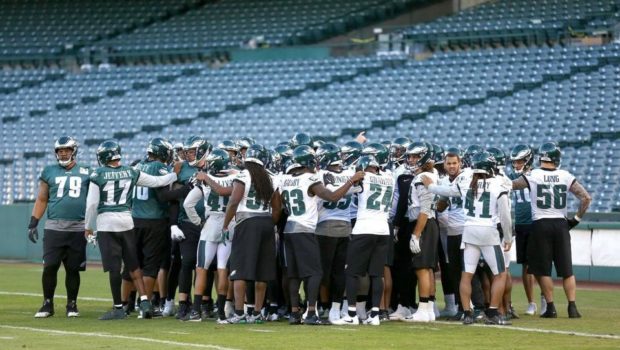 EAGLES-RAMS AT THE TOP OF THE NFC’S SMACKDOWN WEEKEND!

The NFC’s wild-card teams look like division winners, while those on the fringes look like they could host wild-card games in the AFC. Here’s how things stand in this convoluted cluster of a playoff race:

Yes, Carson Wentz and Jared Goff are squaring off in the Coliseum this week, but there’s a bigger battle at play than the Sunday pregame shows would have you believe. Separated by only one game, both teams have legitimate shots at claiming home-field advantage, though neither has much of a postseason pedigree. An Eagles win would finally clinch the NFC East and strengthen their bid for a first-round bye, while a loss would, at worst, leave the door open for the Rams and/or Saints to take control of the No. 2 seed.

Looking forward, Philly has two more games against teams with playoff aspirations (Oakland in Week 16, Dallas in Week 17), and you never know how a two-game losing streak (should they lose to the Rams) might spiral out of control for such a young team. Considering the Rams are 2-1 only halfway through the most exhausting six-game gauntlet any team will face this season (loss at the Vikings, win vs. the Saints and win at the Cardinals coming before games vs. the Eagles, at the Seahawks and at the Titans), they’ve fared pretty well under a first-year head coach and second-year quarterback. That being said, the Rams can lose their control of the West with a loss and a Seahawks win in northern Florida.

So much is riding on this “Thursday Night Football” game. Can you feel the color rush?! The Saints and Falcons play each other twice in three weeks, with the former looking to secure a division title and the latter’s season on the line. Atlanta has four division games left on its schedule, and while the Falcons have a tiebreaker over the Seahawks, they are currently on the outside looking in and have the toughest remaining schedule of the real contenders. A loss essentially takes them out of NFC South contention and likely moves them into position with Green Bay, Dallas and Detroit as long shots.

The red-hot Saints, meanwhile, are gunning for the top seed. Behind an all-time great backfield, New Orleans has won nine of its last 10 and boasts a one-game lead in the South. Their grasp on the division is more of a limp grip than a stranglehold, but there is a scenario in which three 10-3 teams lead their divisions by the end of Week 14, and the Saints hop into the conference’s top spot temporarily. The line between top seed and wild-card hopeful in the NFC is so, so fine this year, which makes the opener of the first biannual Mercedes-Benz Sponsorship Spectacular all the more important. The Saints can put the defending NFC champs behind the eight ball, but if the Falcons can pull out a home win, they can inflict even greater damage on New Orleans and the playoff picture as a whole.

Minnesota Vikings (10-2) at Carolina Panthers (8-4)
Perched atop the conference for the first time all year, Minnesota embarks on its final true test of the regular season. After playing Carolina, the Vikings will not take on another team currently with a winning record. This presents a great opportunity for Case Keenum’s horde of unlikely conquerors to create serious separation between themselves and the other home-field contenders. Minnesota can lock up the NFC North title with a win, but the Vikings could also miss out on a first-round bye with a loss and wins from New Orleans and Los Angeles. Fine line.

Are the Panthers frauds? Is Carolina the team that ran roughshod over Miami before its bye? Or is it the club that snuck by the try-hard Jets and kowtowed to the Saints in consecutive weeks? The Panthers must prove their postseason worthiness on Sunday, their first in a three-game homestand. They don’t control their destiny in the South, and because they’ve lost twice to New Orleans, the Panthers can’t count on a tiebreaker with the Saints to secure a home game for them in January. But a win over Minnesota puts Carolina in position to then wipe away the Pack and Bucs in consecutive weeks, giving the team 11 wins heading into an anything-goes Week 17. Oh, the possibilities.

The Seattle Wilsons played their way back into the playoff race and tossed the entire NFC picture into a blender when they stuffed Philly on national TV in Week 13. The question now for Seattle is, can it sweep through its late-season trial with more consistency than its running back room? In a sneaky Game of the Week candidate, the Seahawks take on the league’s top defense in the Jaguars. The matchup between the ever-scrambling Russell Wilson and the Sacksonville front seven is a must-watch, but in terms of the playoff picture, the stakes are higher. Seattle can secure control of its destiny in the NFC West with a win, with the de facto division championship game against the Rams looming in Week 15. However, the ‘Hawks can also be briefly knocked out of the top six with a loss to the Jags and wins by the Falcons and Panthers. This all thanks to Seattle’s crucial loss to Atlanta in Week 11, a defeat that could end up costing the Seahawks dearly.