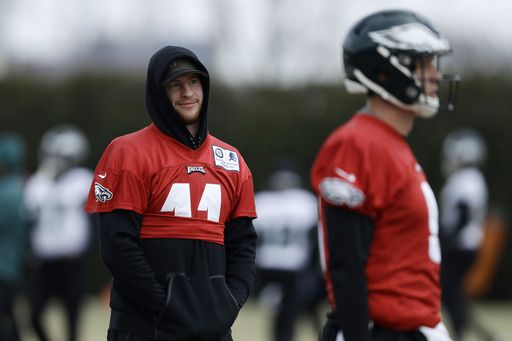 EAGLES-RAMS: BIRDS RETURN SUNDAY TO THE SCENE OF THE CRIME!

The Los Angeles Rams and their fans are psyched that they are 11-point faves over the Eagles this Sunday night.

Especially since Carson Wentz is hurt and Nick Foles is the Birds’ QB.

Be careful what you wish for!

The NFC West champions have a few problems of their own for perhaps the first time this season.

With three losses in their past five games, the Eagles (6-7) are facing an uphill challenge just to earn the opportunity to defend their Super Bowl title in the playoffs. Their offense can’t get rolling, the defense can’t defend the pass, and Wentz’s fractured vertebra sits atop a bulging list of injury problems.

But the Eagles’ gritty performance in a 43-35 win at the Coliseum last season is still fresh in most football minds in Los Angeles. The Rams (11-2) would never take the champs lightly heading into the teams’ Sunday night showdown.

”I still look at them like a Super Bowl-caliber team,” Rams receiver Robert Woods said. ”Still the defending champs. We get a chance to play them in prime time. We get to play at home. We get to play well and redeem ourselves from last week.”

The Rams can’t spend any time thinking about the Eagles’ woes, either. Los Angeles is coming off a dispiriting 15-6 loss in chilly Chicago during which it failed to score a touchdown for the first time in coach Sean McVay’s tenure.

McVay has never lost consecutive games, and no team has beaten the Rams twice during his two seasons – but Philadelphia has a chance to do both. The coach has no trouble getting his players’ attention this week with the combination of their second loss and a visit from the champs.

The Rams don’t know whether they’ll face Wentz, who didn’t practice Wednesday or Thursday because of his back injury. Wentz’s second NFL season ended at the Coliseum a year ago when he tore a ligament in his left knee, but Nick Foles relieved him and led the Eagles to that win over his former franchise, clinching the NFC East in the process.

Along with his Super Bowl MVP award, Foles always has motivation against the Rams: He started 11 games for the team in St. Louis in 2015, but he asked to leave after the Rams drafted Jared Goff in the ensuing spring.

”Doesn’t affect much, because Carson is a great football player, but they also were able to win a Super Bowl with Nick playing really high-level football,” McVay said.