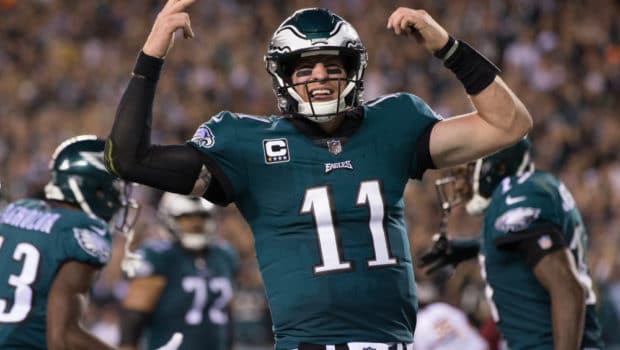 EAGLES’ QUARTERBACK CONFIDENCE SITUATION IS ENVY OF THE NFL!

The only negative is sample size as Carson Wentz is still less than two years removed from playing for North Dakota State, says ESPN. But the other shoe kind of refuses to drop in Philly, where Wentz’s development has accelerated quicker than even the Eagles could have imagined. Wentz is hanging 30 points on the board every week, converting almost every third down and exhibiting total command with no sign of letting up. He’s 24 years old, which means the future is bright. He won’t cost the Eagles any real quarterback money until 2020. Nick Foles is an experienced backup who knows the system should anything happen. It’s crazy that it happened so fast, but the Eagles’ quarterback situation may be the envy of the league right now: