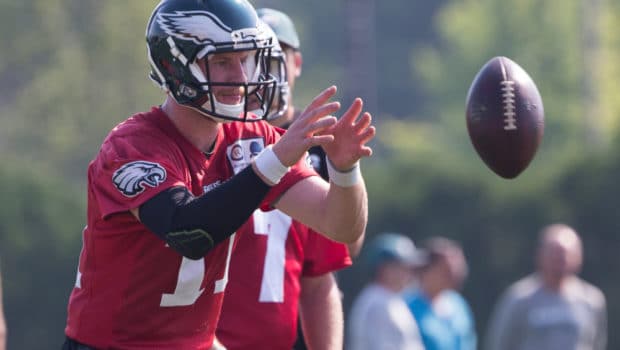 Eagles quarterbacks, rookies and selected vets report tomorrow for the opening of training camp at NoivaCare.

Their first practice will be on Monday, and at 10:40 a.m. coach Doug Pederson will address the media.

The veterans are scheduled to report next Wednesday and the first full-team practice is the following day.

Fans can see the Eagles in action at Lincoln Financial Field for the first time this season on Saturday, July 29 at the open practice. Gates open at 8:30 a.m.

Youth Day is the theme for the second open practice on Sunday, August 6.

The Eagles open the preseason on Thursday, August 10 at Green Bay. NBC10 will broadcast the exhibition games locally with Scott Graham and Mike Mayock in the booth, and Dave Spadaro on the sidelines. The first home preseason game is the following Thursday against the Buffalo Bills.

Miami comes to Philly for a set of joint practices ahead of the third preseason game on August 24. This game will also be broadcast live on NFL Network.

The preseason concludes on August 31 at the New York Jets. The Eagles must reduce the roster from 90 to 53 by 4 p.m. on September 2.

The regular season kicks off Sunday, September 10 in Washington.