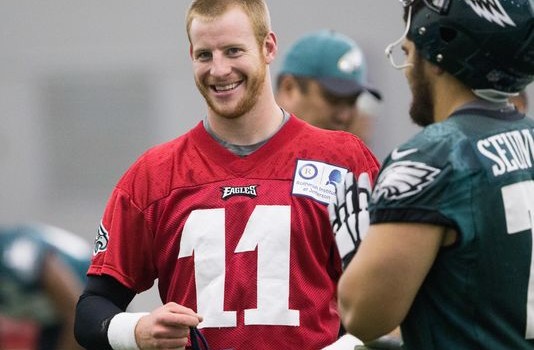 There was no hay hanging from his hair.

And he didn’t blush.

But when the Eagles No. 2 overall pick in the draft held a presser yesterday at Novacare, he played the humble part to a T!

Wentz hasn’t met Sam Bradford, but he can at least imagine how his chemistry will flow with the veteran quarterback whom, in all likelihood, he ultimately will replace.

“I think the relationship with him, and I believe with the other quarterbacks, will be great,” Wentz maintained at the start of the Eagles rookie minicamp. “It will be a really competitive atmosphere. Hopefully, we’ll learn together, grow together and really push each other.”

That’s easy for Wentz to say, a day after signing a four-year, $26.67 million contract that included a $17.6 million bonus. He’s the quarterback of the future, the North Dakota State product for which the Eagles gave up a bundle in order to draft second overall.

Bradford, the incumbent starter on shaky ground, is the disgruntled one who demanded a trade and staged a two-week boycott after the Eagles brain trust decided to trade up to select his replacement.

“Personally, I don’t think there will be a lot of tension there,” Wentz said when asked what he expects the vibe will be in a quarterbacks room that will also include veteran backup Chase Daniel. “I think the coaches and everybody will be on the same page.”

Time will tell just how sticky it gets. New coach Doug Pederson has indicated that the plan is to groom Wentz behind Bradford, but circumstances – like competition against the intense environment that always surrounds the Eagles – could surely test that plan.

In the meantime, Wentz, while acknowledging that he’s anxious to play, tried his best not to add any fuel to the combustible mix that he finds greeting him at the NFL door. Bradford and Wentz will work together for the first time next week during organized team activities (OTAs) that will combine veterans with rookies.

“It is what it is,” Wentz said. “As I’ve been saying all along, it’s out of my control. People want to make it a situation, but I think everybody in that quarterback room, everybody in the entire organization, is competing.”

Wentz, who said he learned patience while sitting up the bench for consecutive Football Championship Subdivision national championship teams at North Dakota State, said the Eagles haven’t indicated how they will bring him along. He hardly sees a need to press the issue.

At least not now, as he is just at the point of grasping a new playbook.

Playing the role of humble rookie is only the beginning for Wentz.