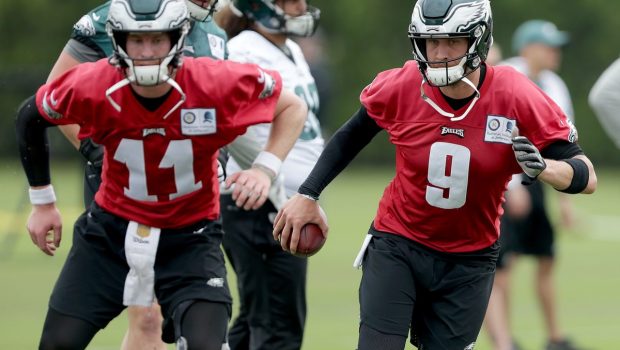 For the third week in a row in this preseason, the Super Bowl champs have looked slow and stupid, lousy and lackadaisical.

The offense has been non-existent.

And, even taking into consideration that they have fielded mostly scrubeenies, it might be time to think twice about a Supe repeat.

Nick Foles‘ performance was much more reminiscent of his final games in St. Louis in 2015 rather than his Philly Special-orchestrating, Super Bowl MVP-winning performance last February.

The quarterback struggled mightily for an Eagles squad that committed four turnovers in the first half — two of which came off interceptions. He looked lost on some of his defensive reads, and the Eagles‘ offensive line wasn’t providing him much margin for error (he got sacked for a safety in the first quarter).

Foles’ final numbers — 13 of 17 for 127 yards — look a lot better than the sputtering drive charts that chronicle his stint.

Eagles coach Doug Pederson has insisted all offseason that starting quarterback Carson Wentz (knee) will only play if he receives medical clearance to do so. Last night’s performance by the Eagles might have annihilated the offseason narrative that Foles will be a worthy and efficient keeper of the Eagles‘ offensive flame until Wentz is completely ready to return.

“It’s hard to pinpoint one,” Pederson said when asked what the reasons might be for Foles’ struggles. “I think sometimes you just put a little bit too much pressure on yourself, or you press to make a play — whatever it might be. I don’t know. It’s tough. Having been in those situations before, sometimes you feel like you need to make a play yourself when you’re struggling offensively, and then it doesn’t come. We can’t do that. We have to stick within our plan and stick within our means, and continue to execute.”

Let’s not get too carried away with Foles’ performance. A heap of injuries have shrouded the true nature of Philadelphia’s offense. The offensive line struggled to provide adequate protection — and that was before Jason Kelce made an early exit after suffering an apparent minor injury.

With Alshon Jeffery and Nelson Agholor out, Foles’ passing options were limited to Zach Ertz, Mike Wallace and Shelton Gibson. Wendell Smallwood managed to churn out 53 yards on 12 carries, but the absences of Jay Ajayi and Corey Clement definitely didn’t help. Until the Eagles are fully healed, the true character of their 2018 offense will be extremely difficult to judge.