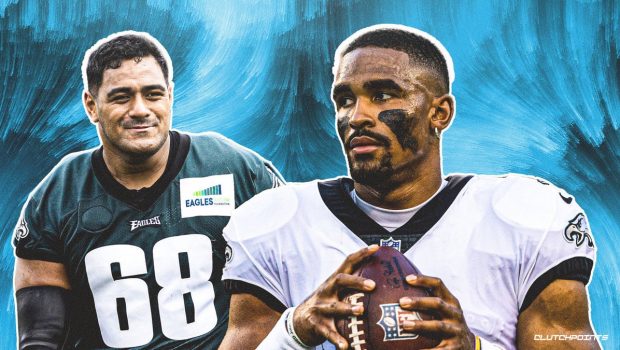 EAGLES QB HURTS HAS WISDOM BEYOND HIS YEARS, MAILATA SAYS!

“He has an old head on his young shoulders, and it shows very late in games. He’s still there talking us up. The grit, the perseverance, those are the qualities he himself possesses. He’s all bite, no bark. He talks it and he walks it. So, that’s very encouraging to see from your QB, and you just want to make sure you have his back.”

When Mailata blew two straight blocks on rusher Haason Reddick, Hurts told Mailata “next play” and the 6-8, 380-pound Mailata echoed that to Hurts after a missed pass.

“That made me smile,” said Hurts.

“It made me smile because it’s something I preach. I got a taste of my own medicine in that moment, and it felt good. Next play mentality, Dawg Mentality, and that was a situation where I had to have some Dawg Mentality, show some perseverance and overcome.”