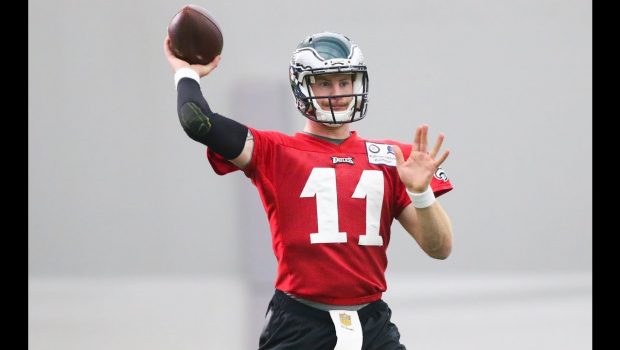 Most of the lame-ass local Philly media think that there’s no way Carson Wentz will be under center when the Super Bowl champ Eagles open the season on Sept. 6 at the Linc against the Atlanta Falcons.

However, NFL insider Chris Mortensen appeared on ESPN’s NFL Live yesterday and said Wentz is ‘shockingly ahead of schedule’ in his recovery from ACL/LCL injury.

“I’m always one of the skeptics on something like this because it’s a nine-to-12 month recovery from ACL surgery and nine months is right up to that Thursday night opener against the Atlanta Falcons in September.

He even participated a little bit in 7-on-7 yesterday. He’s doing individual drills. He threw a ball 60 yards last week effortlessly. His legs are fast. He’s stronger. And I think now, inside, you’re starting to hear they’re not going to be surprised if he really is ready for that opener.

But Doug Pederson, everybody else publicly will say ‘We’re not rushing him.’ And there is going to be some caution. They don’t have to [rush him]. Certainly, you have to be prepared for any setback.