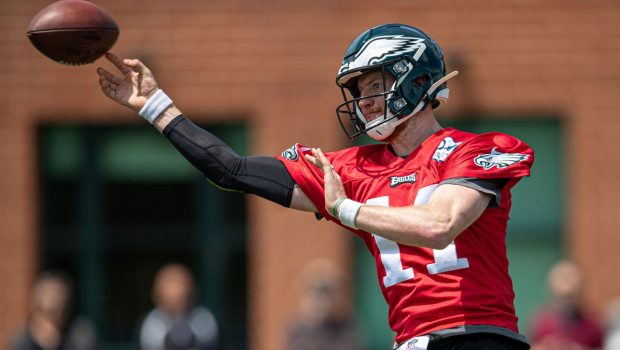 “Any time you go through a struggle or adversity in life you learn something,” Eagles quarterback Carson Wentz said his recovery after a practice Tuesday. “I’m just trying to keep pressing forward and grow.”

The first week of Eagles OTA’s is in the books and Carson Wentz has passed the eye test after his recovery from back surgery last winter.

He delivered powerful passes to the sideline off his signature hop-step.

He unleashed some perfect deep fades in one-on-one will drills. Things were not nearly as smooth in seven-on-seven and full team drills – “X’s and O’s-wise, things weren’t perfect,” he conceded – though that’s not what this return was really about. This was about just being able to do the same things that all of his healthy teammates could, with no restrictions.

“This is the time to kind of get on the same page,” coach Doug Pederson said. “We’re working through some things, schematically, offensively, defensively, on special teams. Is it important that he’s out? I do think it’s important that he’s there working with the guys, and that is why I’m excited – that he gets a chance to do that.”

Top outside receiver Alshon Jeffery (not practicing Tuesday and dealing with a rib injury), Pro Bowl tight end Zach Ertz and slot receiver Nelson Agholor are holdovers, but that’s about it.

Gone is Wentz’s good buddy Nick Foles, who got $50M from Jacksonville.

DeSean Jackson is back for a second stint with the Eagles, out to show the world he is still a burner at age 32, and he toggled in and out with sturdy second-round pick JJ Arcega-Whiteside in drills Tuesday.

Jordan Howard, acquired via trade, is firmly in the running back mix along with second-round pick Miles Sanders, and second-year tight end Dallas Goedert is in line for an expanded role as Pederson dabbles with more 12 personnel, involving two tight-end sets.

The defense should have more bite as well, with expectations quite high around here about another postseason surge from the Eagles. The roster is deep and plentiful at most vital positions (I could see a handful of veterans traded late in camp to replenish the draft picks dealt away for Wentz and others). And, as high as the Eagles are on likely No. 2 quarterback Nate Sudfeld, all of it hinges on having Wentz on the field in late December and not sidelined with injury.

Which is why Wentz focused so much time and energy or trying to do whatever he could to prevent it, while knowing that late-season health cannot be guaranteed.

“With whatever limitations I’ve had, I’ve been progressing – upper body, lower body,” Wentz said. “I’m trying to transform my body this offseason and I think I’ve seen a lot of development there for me personally, and I think that will help me going forward staying healthy and for longevity and everything.”

Surely, it can’t hurt. Anything to avoid the agony and isolation of another rehab. Anything to try to ensure that he is able to experience the monotony of these drills in shorts and shells again next spring.

“I’m not going to dive into all the specifics of rehab, I never really do that,” Wentz said. “But it’s a lot of work. A lot of work to get there and I’m just excited to be back out there and to be with the guys and finally face a defense with all of camaraderie going on. It’s fun.”

No one was savoring the roughly two hours spent under the sun Tuesday more than Wentz. The joy of not having to jostle with a bulk brace was obvious. “I think he wanted to take that brace off a long time ago, but they wouldn’t let him,” Goedert said. “So I think he’s happy being out there, being himself.”

Wentz’s zeal can be infectious, and Sudfeld told me he felt like the Eagles got a jolt of energy back by his return. Lest anyone forget, Wentz was in the hunt for the MVP in 2017, just his second season, for good reason, and 2018 was always going to be more of a struggle due to the timing of his ACL tear. The Eagles themselves were in a bit of a collective post-Super Bowl fog early on, and Wentz still managed to throw 21 touchdowns to just seven interceptions in 11 games and had a slightly better quarterback rating than the MVP-esque year before.

The Eagles have long known precisely what they have here – which is why even despite his injuries there is a certain finality within this front office about doing a long-term deal soon enough – and while it was Foles who hoisted that Lombardi Trophy, that Eagles team wouldn’t have been in that position without 13 weeks of mastery by Wentz leading up to it. He will create January highlights of his own. It’s just a matter of time, and, well, some better luck.

“He does so may impressive things that it’s hard to be surprised anymore, because I see it all the time,” Sudfeld said. “But he is really smart, he has such a powerful arm and just his understanding of football is incredible. And he’s a quick processor. Really, if you are designing a quarterback in a lab, he is way up there with what you’d want.

“Every single high-level quarterback goes through adversity points in their career, whether it’s injury or performance or anything like that. And Carson has just had some unfortunate blows with injuries. But I think he’s grown a lot from it, and his game is as good as it’s ever been, and it’s going to continually get better. The sky is the limit for him. It’s unbelievable. I’m exited for him.”

As far as late-May days go, for Wentz this is about as good as it gets. He has another month of these practices before him, and then a full training camp without having to be held back or skipped for a few days. After what he’s been through, this isn’t a bad place to be at all.

“I feel really good going forward,” he said, fortified by the work he has put in, with a city hopeful that this latest recovery will somehow prevent history from repeating again.