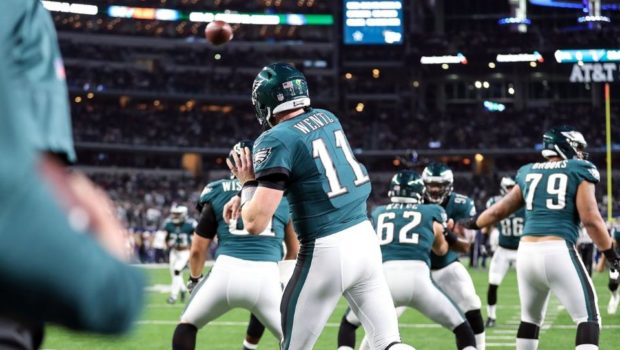 HOW EAGLES’ OLD-SCHOOL, GUNSLINGING QB CARSON WENTZ HAS MADE THE NFL EXCITING AGAIN!

Wentz’s professional career couldn’t have started much better. The tall quarterback from the low-level football program led the Eagles to a 3-0 start in 2016, complete with five touchdowns and not one interception.

Wentz initially thrived in a conventional and safe offense that looked a lot like many of the other successful short-passing attacks across the league. Then he struggled for much of the rest of the year, raising quiet doubts about the No. 2 pick’s future.

Instead of fixing it this season by pulling the reins back even further, the Eagles tried something completely different. They stopped trying to mimic the low-risk passing styles that have taken the league by storm.The change has transformed Wentz from a tantalizing rookie into an MVP contender on the NFL’s best team. One of the most conservative quarterbacks around has been remade into one of the most aggressive–and someone his coach Doug Pederson has compared to Brett Favre. And NFL defenses have had no clue how to stop him.

“I love taking shots down the field,” Wentz said in training camp.

The Eagles have the best record in the NFL at 10-1 and any conversation about how they have become a Super Bowl contender begins and ends with the 6-5 quarterback from North Dakota State. He leads the NFL in touchdown passes. He has the fourth highest passer rating. And he leads the NFL’s highest-scoring offense.

What makes Wentz so good is that he plays nothing like the other best quarterbacks. In an age when the league’s best have mastered high-percentage, short-yard passes, Wentz is the one torching defenses deep.

“I like to think I’ve always been a pretty aggressive player,” Wentz says, “but maybe just a little more confident [now] in aggressive chances.”

This has made him more than a remarkable outlier. It has produced a spectacle of old-school, gunslinging football that the league has sorely lacked in recent years. His style is so appealing that even the world’s most famous Dallas Cowboys fan—LeBron James—says that Wentz is his favorite player: