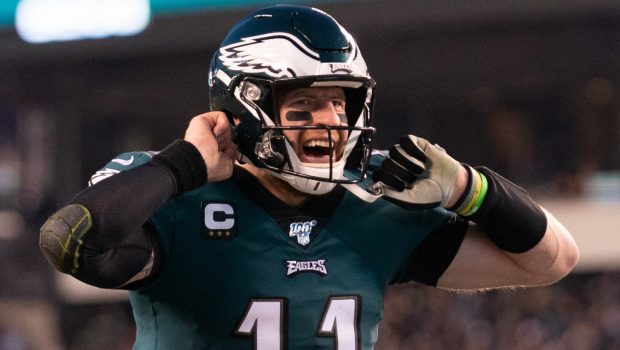 EAGLES QB CARSON WENTZ IS HAVING A DECEMBER TO REMEMBER!

It’s Dec. 23, and Wentz is not in a back brace, or gimping around with a surgically repaired knee.

In December two years ago, there was the season-ending, Super Bowl-eliminating knee injury suffered at the Rams.

In December last year, there was the season-ending broken bone in his back that took Wentz away from another magical Eagles run to the playoffs. Foles envy. Major Foles envy.

So much about this crazy Eagles run from 5-7 three weeks ago to 8-7 and a firm grip on the NFC East title seems like the football gods paying back Wentz.

Think about it: Hurt in December in two straight serendipitous seasons. The Eagles, in a show of faith, extended his deal for four years at $32 million per in July. The early returns were depressing, mostly. Slumping and wholly inconsistent, Wentz loses at home to the Lions, gets humiliated at Dallas, can’t throw worth a darn in losses to New England and Seattle, and starts December with a desultory loss at Miami. The next week, on the one-year anniversary of fracturing a vertebra in his back, Wentz and the Eagles reach the edge of a cliff. They’re down to the Giants 17-3 at the half. “Windy, rainy, ugly, and some new players,” Wentz said. “At halftime, we’re thinking, Time to go. Now or never. This is the season.”

They won that night behind Wentz. They won the next week in Washington behind Wentz. And they upset Dallas last night 17-9 behind Wentz and their best defensive performance of the year, holding the top-ranked offense in the league to three field goals and three-of-14 on third downs. If the Eagles win in the Meadowlands on Sunday, the NFC East is theirs.

It’s late December, I said to him, and you’re healthy, and you’re playing. What’s that like?

“Ha ha,” he said, sounding like he needed to knock on some nearby wood. “I mean, this is . . . it’s God’s plan. This is what I expect to be doing every year. I haven’t been playing in these games in a while because of injuries. So thankful to be in a playoff-type game, the kind of game I came here to play in. I expect to be playing in December and helping our team get to the playoffs. I’m trying to make the most with what God’s given me.”

FMIA Week 16: Don’t Look Now, But Philly’s a Factor (With a Healthy QB)