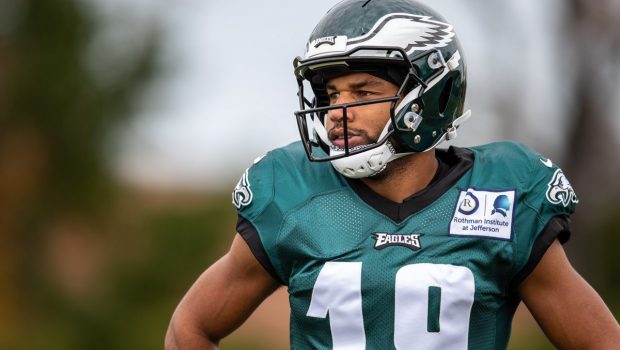 Darren Sproles will miss yet another game this Sunday night as the Eagles take on the Cowboys at the Linc.

He hasn’t played since Week 1 because of a pulled hamstring, and it’s beginning to look like he won’t play another down in 2018.

Which presents a big issue for the Eagles, who waived DeAndre Carter this week:

Who will return punts?

That job may now fall to the newly acquired Golden Tate, who has returned 92 punts in an NFL career that began in 2010.

Tate has averaged 10.6 yards per return, which ranks eighth in the NFL since 2010 among players who have at least 50 returns and is slightly better than Sproles’s mark of 10.1. However,

Tate last fielded more than two punts in a season in 2015.

It’s been a final season to forget for the 35-year-old Sproles, who also missed most of the 2017 season after suffering a broken arm and torn ACL on the same play in a Week 3 game against the Giants. In a letter to fans announcing his plans to retire, he said he didn’t want to go out like that.

“Coming back from any injury is tough — especially a knee injury for a running back. I wondered if I was going to come back the same, if I would still have my quickness,” he wrote. “That’s the main thing because I don’t want to go out there and start getting smacked. Once I started rehabbing and running again I could tell I was good and ready for one more healthy year.”

A three-time Pro Bowler who has carved out a lengthy NFL career despite standing just 5 feet 6, Sproles has the sixth-most all-purpose yards in NFL history.