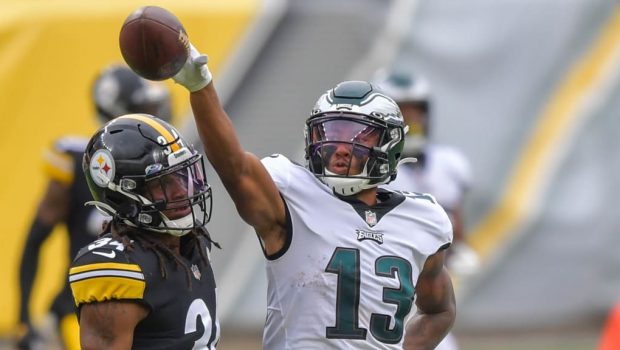 Travis Fulgham has burst onto the scene with much of the Eagles receiving corps injured.

His fantasy ranking has finished as WR25, WR2 and WR9 in the three games he has played.

He caught six of 10 targets in Week 6 for 75 yards and picked up his third score in three games in a relatively difficult matchup against the Ravens.

He has a solid chance to extend that streak into the next two weeks with the Giants and Cowboys on deck, even if the Eagles get any of Alshon Jeffery, DeSean Jackson or rookie Jalen Reagor (eligible for return from IR this week) back.

.@Eagles @TravisFulgham is “mana from heaven” If I were coaching the team in So Philly I would be drawing up new plays everyday to find ways to get the ball in 13’s hands. The playoffs are dependent upon it! #BaldysBreakdowns pic.twitter.com/GwaKXkml8q