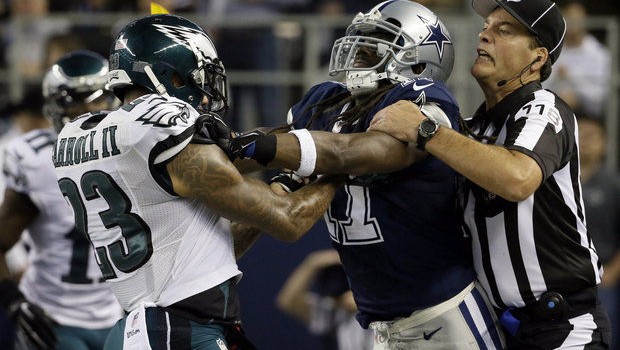 EAGLES’ PLAYOFF HOPES MIGHT EVAPORATE IF THEY LOSE TO DALLAS

There are three weeks left in the NFL season, and the whole town is buzzing about the Eagles’ position in post-season play — and whether or not they will even make the playoffs.

Which ramps up the pressure on the Birds to win their rematch with the Dallas Cowboys next Sunday night at the Linc. Because if Dallas wins there is a real possibility they will miss this post-season even if they beat Washington and New York in their last two regular season games.

Arizona (10-3) remains the No. 1 seed, while Green Bay (10-3) would be the No. 2 seed. The Cardinals hold the second tie-breaker over the Packers by virtue of a better conference record.

In order for the Eagles to move ahead of either Green Bay or Arizona, two teams it lost to earlier this season, they are going to need some help.

The Eagles would have to win their remaining three games to get to 12-4, and hope Green Bay or Arizona loses two of three.

Green Bay’s remaining games are at Buffalo, at Tampa Bay and home against Detroit. Arizona plays at St. Louis, hosts Seattle and is at San Francisco.

Seattle also remains in the mix after their win over the Eagles this past weekend. If Arizona falls out of first place in the NFC West, the Seahawks could move ahead of them, and ahead of the Eagles.