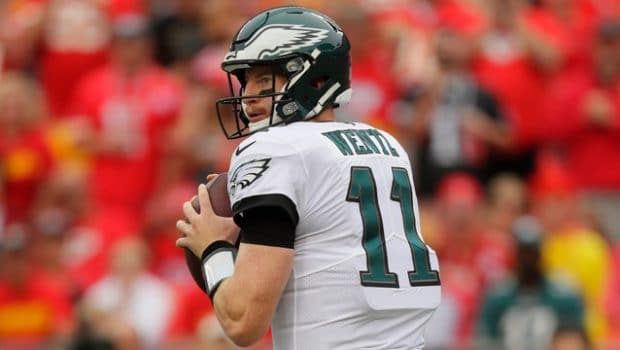 This was a game the Eagles could have won.

Kelce’s touchdown catch with 6:25 left and Hunt’s second TD scamper appeared to have put the game away.

But Carson Wentz (above) hit Nelson Agholor for an answering score with 14 seconds left, and Trey Burton jumped on the onside kick a few seconds later to give the Eagles one last throw to the end zone.

Wentz unloaded from just inside the 50-yard line, but his pass fell incomplete as time expired.

Kelce finished with 103 yards through the air, highlighted by his somersaulting score. Hunt had 81 yards on the ground, building on a record-setting debut in which he piled up 246 yards from scrimmage in a season-opening victory in New England .

Wentz finished with 333 yards and two touchdowns passing, despite facing relentless pressure all afternoon. He also led the Eagles (1-1) with 55 yards rushing.

It was 13-all in the fourth quarter and the Birds had the ball when Wentz threw a pass that bounced off the Chiefs’ Justin Houston and into the arms of Chris Jones. The pick gave Kansas City the ball deep in Eagles territory, and Kelce hurdled into the end zone five plays later.

The Chiefs’ defense, missing star safety Eric Berry to a season-ending injury, kept the Eagles in check most of the game — and for good reason. They’re coached by Doug Pederson , who spent several years as the offensive coordinator in Kansas City and took the same system with him to Philly.