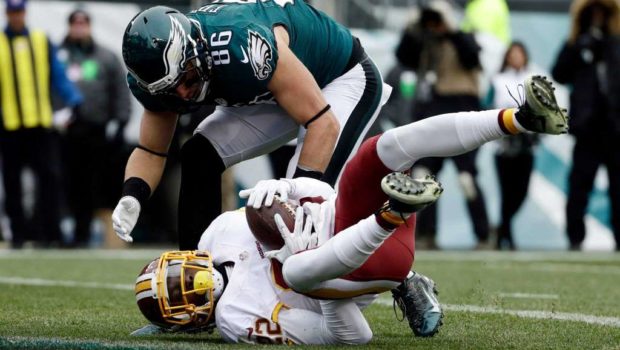 EAGLES PLAY THEIR ASSES OFF, COUGH IT UP TO REDSKINS 27-22!

Chris Thompson’s 25-yard touchdown run with 1:54 remaining lifted the Washington Redskins to a 27-22 victory over the Eagles today at the Linc.

Kirk Cousins threw two touchdown passes, including an 80-yard toss to DeSean Jackson, and had a pick-six.

The Eagles took a 22-21 lead when Caleb Sturgis hit a 41-yard field goal with 4:59 left after holder Donnie Jones got the high snap from third-string long snapper Trey Burton down in time.

Carson Wentz drove Philadelphia to the Redskins 14 in the final minute, but Ryan Kerrigan sacked him to force a fumble and seal the win for Washington.

The Redskins (7-5-1) snapped a two-game losing streak and remained in the middle of a jumbled playoff race.

Jackson made a twisting, over-the-shoulder catch and spun away from Leodis McKelvin before slowing down and jogging into the end zone to give the Redskins a 14-13 lead in the third quarter.

McKelvin intercepted Cousins and returned it 29 yards for a TD early in the fourth quarter, but Wentz’s pass to Jordan Matthews was knocked down on the 2-point conversion.

Cousins then connected with Pierre Garcon on a 15-yard TD pass to extend the lead to 21-13.

After Dustin Hopkins hit the left post on a 38-yard try in the first quarter, the Redskins took a 7-6 lead on their next possession. Rob Kelley knocked over a defender at the end of a nifty, 22-yard TD run

Wentz finished with 314 yards passing and one TD pass. Cousins threw for 234.

The Redskins have won five straight games against the Eagles.

The Eagles lost long snapper Jon Dorenbos to a right wrist injury. Backup Brent Celek made a poor snap on a 50-yard field goal attempt and then suffered a stinger, leaving Burton to handle the tough task. After the offense lined up to go for fourth-and-1, Wentz called a timeout. Burton practiced a couple snaps on the sideline along with linebacker Mychal Kendricks. Jones had to reach up to catch Burton’s snap and Sturgis took a stutter-step before kicking the ball through the uprights.

Darren Sproles took a hard shot to the head while trying to catch a punt in the fourth quarter and left the game to be treated for a head injury. Washington’s Deshazor Everett ran Sproles over, drawing an unsportsmanlike penalty. Players from both sides immediately started pushing and shoving. Sproles remained down for a couple minutes before walking off.

An illegal block by Zach Ertz negated Sproles’ 72-yard punt return for a score in the third quarter. … The Eagles drove to the Redskins 3 on their second possession before Wentz tossed an interception to Everett on third down.