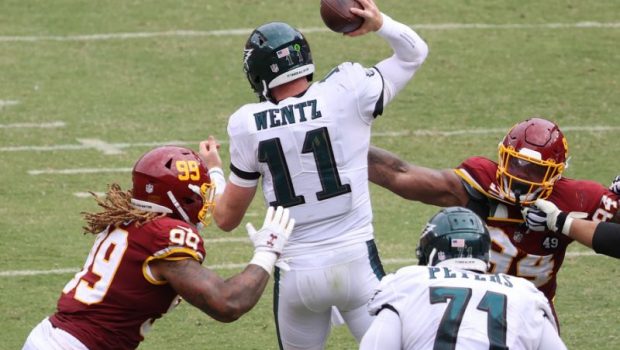 WENTZ WAS A DEER IN THE HEADLIGHTS, AND PEDERSON’S TO BLAME!

The biggest knock on Eagles coach Doug Pederson is that he does not adjust to what is going on during the game.

All great coaches do.

Yesterday, Pederson never did even though the Eagles offensive line was awful and let quarterback Carson Wentz get sacked eight times.

Pederson went for it on fourth-and-4 late in the third quarter with his team leading by three and with his third-string right tackle, Jordan Mailata, on the field.

That dangerous out route to Jalen Reagor late in the second quarter became the first of Wentz’s two interceptions. It set up Washington’s first touchdown, and it changed the course of the game, and Pederson’s response was to have Wentz throw deep twice more before the end of the half. Fifty called passes and 17 called runs from Pederson, as if the goal wasn’t as much to win the game as to bury Washington with one big play.