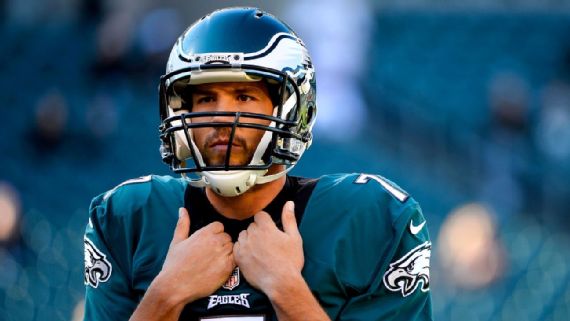 Eagles head coach Doug Pederson was emphatic today that Sam Bradford (above) is the No. 1 quarterback on the team.

Bradford was clearly the guy during the Eagles’ first full-team OTA of the offseason, taking all of the reps with the first-team offense, and going first during all quarterback drills, ahead of both Chase Daniel and rookie Carson Wentz.

It was the arrival of Wentz, who was drafted with the No. 2 overall pick, that caused Bradford to request a trade, as the quarterback clearly felt he no longer had any future with the team.

The Eagles could use some changes.

Bradford ended his two-week holdout last week, and since then, Pederson says things have gone back to normal.

“It’s been great,” Pederson said of his relationship with Bradford. “I have actually talked to Sam since he’s been back. I told him my feelings haven’t changed.”

Wentz took part in his first full-team practice today, and he practiced strictly with the third-team offense.

“Carson has a long way to go with this system,” Pederson said of Wentz. “He is learning everyday, but Sam is the guy.”