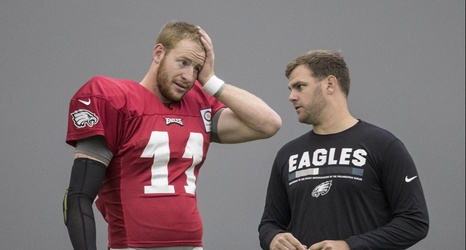 So, Eagles coach Doug Pederson, who has resembled a deer in the headlights with his play-calling recently, has reportedly already given up some of it to Press Taylor.

If that’s true, he should find someone else to give it to!

From The Inquirer’s Jeff McLane:

[…] the Eagles coach has already doled out some to assistants, NFL sources told The Inquirer.

Pederson has handed the reins over to pass game coordinator Press Taylor several times in recent games, and could give him more responsibility starting Sunday in Green Bay, according to the sources.

Senior offensive assistant Rich Scangarello has also been calling plays, specifically in two-minute situations, since the beginning of the season […]

The 32-year-old Taylor, who is also quarterbacks coach, has never previously called plays at any level, let alone the NFL. Pederson handed him the reins for a bit against Seattle as the offense went three-and-out on its first five possessions, a source said.

If Pederson is to hand over more play-calling to Taylor, he would be doing so over Scangarello, who called plays last season as Broncos offensive coordinator, and senior consultant Marty Mornhinweg, who has called plays in the NFL for over two decades