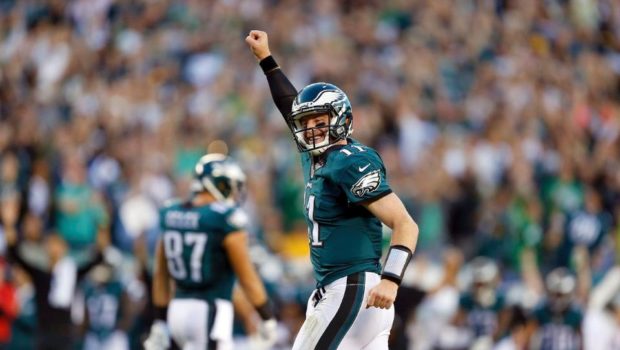 The 3-0 Birds don’t play again until Oct. 9 at Detroit, so prepare for two weeks of non-stop celebration!

The Carson Wentz Wagon gained steam yesterday as the rookie threw for 302 yards and two touchdowns to pace the Eagles in a 34-3 rout of the Steelers that moves their record to 3-0 ahead of their bye week.

There has been plenty to like about the Eagles’ performance over the first three weeks, particularly with a defense that has allowed just 27 points so far this season. It’s a quarterback-driven league, though, and the ones picked at the top of the draft always get the most attention, so Wentz was the man of the hour again on Sunday.

Coach Doug Pederson said “the sky is the limit” for the rookie while Steelers coach Mike Tomlin complimented Wentz on an “awesome job” against his team. Eagles safety Malcolm Jenkins said that “what he’s doing is special” and tight end Brent Celek is feeling enervated by the rookie’s spot in the offense.

With Wentz taking over the job just before the start of the regular season after initially being ticketed for the No. 3 job, expectations were modest about what he’d do. Three weeks of winning, turnover-free football will bump those expectations up significantly, but it’s clear the Eagles believe that Wentz has what it takes to continue thriving after the bye.