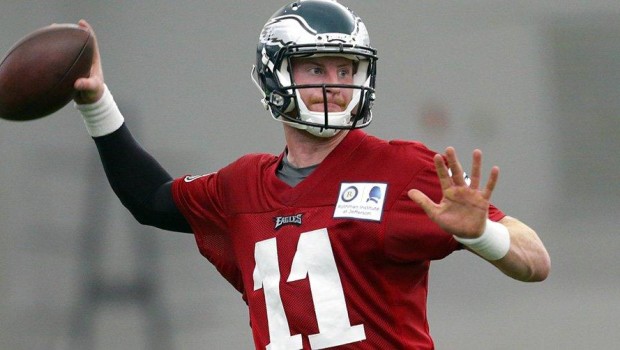 EAGLES’ PEDERSON ON WENTZ: ‘HE CAN GET A LITTLE JUMPY … HOPPY’

Newbie head coach Doug Pederson is a former Eagles quarterback who knows the value of whispering sweet nothings in the ear of a rookie.

The Eagles deliberately are bringing Carson Wentz along slowly. But Pederson is noticing that Wentz has exactly what the team has been looking for, essentially since Donovan McNabb was traded away.

“Some of the plays he’s made yesterday and through rookie camp, some of the — there’s a couple of ‘wow’ plays that you just go, ‘That’s the kind of quarterback that you know you have.’ He’s right on track, where we want him to be. He’s competing every day. He’s learning in the room. He’s asking great questions in the room. Chase [Daniel] has done a great job with him and learning as well with Sam [Bradford]. I like where he’s at right now.”

Pederson said that, mechanically, he’s trying to get Wentz to keep his feet closer to the ground.

“He can get a little jumpy, a little hoppy,” Pederson said. “He can also be a little upright in his frame, so try to keep him in a bent posture a little bit, and then just his knowledge and understanding of the offense, being able to anticipate and become an accurate — a little more accurate passer. He can work on those things with drill work and just the more reps he gets, he’ll be more comfortable with those. There are just a couple things we’re doing with him. . . .

“Sometimes he can get a little tall, and sometimes that affects your throw. Keeping his feet tighter to the ground where he can get the ball out faster, and then just where he’s — sometimes some of those balls can be the process of — because I’ve been there. It’s the process of thinking about the play, and the last thing you’re worried about is the throw. You’re more worried about the progression of the play, and sometimes that affects the throw.”

It still remains to be seen if/when Wentz will be putting those nuts-and-bolts lessons into operation this year. With a low bar and a high ceiling, however, it would be foolish to bet against Wentz getting a chance to learn the game by playing in games that count.