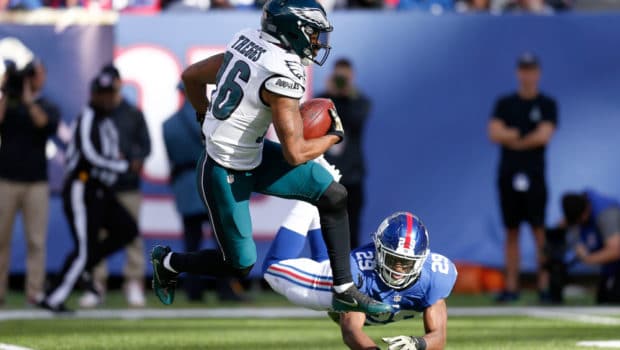 EAGLES’ PEDERSON NEEDS TO GET HIS HEAD OUT OF HIS ASS AND TARGET BRYCE TREGGS!

One big question in the wake of the Eagles’ loss to the Giants last Sunday and in preparation for the Falcons game Sunday at the Linc is:

Will dumb-o Eagles’ coach Doug Pederson get his head out of his long enough to make Bryce Treggs a prime target for Carson Wentz.

Treggs was targeted four times against the Giants. He caught two of those passes, both plays resulting in a first down.

His biggest play of the day came at the beginning of the second quarter. Treggs blew by cornerback Janoris Jenkins and safety Nat Berhe down on the seam for a 58-yard reception.

“We knew their safeties play kind of low when there’s a one receiver set,” Treggs said. “Greg [Lewis] sent me out there and told me to run fast, and that’s what I did.”

Though the bomb from Wentz was the highlight of Treggs’ afternoon, the rookie’s first career reception showed he’s more than just a deep threat.

With Wentz under pressure in the first quarter, Treggs got open on a comeback route for a first down. His 4.39 40-yard dash speed forces defenders to respect him deep, giving him more of a cushion to get separation underneath.

This aspect of Treggs’ game could be just as valuable as his deep speed. Eagles receivers have struggled all season to get separation and Treggs showed on Sunday that he could get open in different levels of the field.