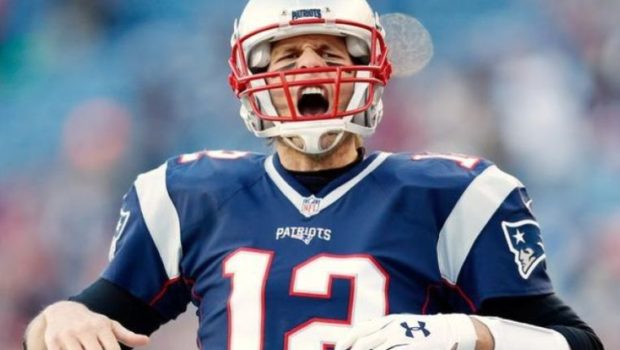 EAGLES-PATS SUPE: LAST 2 MINUTES OF 1ST HALF WILL TELL THE TALE!

Philly fans know this all too well. The Eagles led 7-0 early in Super Bowl 39. Then Tom Brady (above) threw a touchdown pass with 1:16 left in the second quarter. Then New England got the ball back to start the third. They scored a touchdown again—the two-for-one. Which was the turning point and difference in the 24-21 Patriots win.

Here’s just how good they are: The Patriots scored in the final minute of the first half 12 times this season, including the playoffs. That means in two-thirds of their games they put up points right before the break.

Even for an offensive machine like New England, this isn’t normal. The Patriots have scored 66 points in the final two minutes of the first half this year. That’s not just more than any other team in the league. It’s nearly twice the average of the rest of the league (37.1 points), according to Stats LLC.

The gap between New England and everyone else is even more jarring in the final minute: The Patriots put up 56 points. The 31 other teams averaged 24 points. Four teams didn’t score a single touchdown in the last 60 seconds of the first half. New England put up five.

In some games, the late first-half score cemented a blowout. In others, it evened the game up without giving the other team enough time to respond. On three occasions, it led to a devastating two-for-one: The Patriots scored to close out the first half, got the kickoff to start the third quarter and scored on that possession, too.

The AFC Championship was a clinic in their mastery of these situations. They got the ball with 2:02 left on the clock against Jacksonville. They ran the ball once to start the drive, with the clock stopping because of the two-minute warning. Then Brady dropped back to pass on six consecutive plays. Four were complete. Two netted defensive penalties. After that, it just took a one-yard run from James White into the end zone.

“If we could get it going then, we could win the game,” Patriots coach Bill Belichick said. “It took us a little while to do that, but that was a big drive for us.”

That gave Jacksonville the ball back with 55 seconds. The Jaguars didn’t trust Bortles to march downfield in roughly the same time it took Brady. Bortles took two knees and they went into the half.

But the Patriots rarely think like that. Even with almost no time left, they at least try to put points on the board. The most telling instance comes from a rare New England loss. Just before halftime of the team’s Week 4 defeat to the Panthers, the Patriots got the kickoff with 26 seconds to go. They had saved all three timeouts for just this scenario. They only needed two of them. A nine-yard pass took eight seconds off the clock. An incompletion took seven more ticks. Then a 26-yarder left only four seconds but got the ball within range for Stephen Gostkowski, who converted the 58-yard kick. It was the longest field goal in franchise history—and it came on a possession almost any other team might have written off.

Patriots players say there isn’t any secret to their outsize success in these tight spots. And you know something is critically important in Foxborough when everyone is tight-lipped about it.

Even though everything is supposed to be harder in the Super Bowl against another incredible team, the Patriots are actually better at this in the final game of the season. New England has played in seven Super Bowls with Brady and Belichick. They have scored in the final two minutes of the first half of them in six of those seven. Five were touchdowns, and the other was a Gostkowski field goal at the end of last year’s first half.

This is shockingly necessary. When it comes to the final game of the season, the Patriots have shown a knack for coming out of the gates slowly: In those seven Super Bowl appearances, New England hasn’t scored a single point in the first quarter.