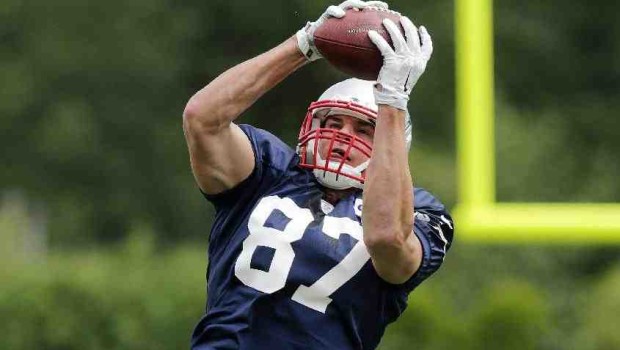 EAGLES-PATS COULD MEET AGAIN NEXT FEBRUARY

There was an eerie familiarity to the Eagles practice against the New England Patriots.

Tuesday’s Birds-Pats practice was crisp, professional, and efficient. Each team got in a ton of reps for their starters on both sides of the ball. There was no walking between stations, only jogging. Tom Brady and Nick Foles were maestros, matching each other with three touchdown passes and no interceptions.

There was no nonsense between the Patriots and Eagles cornerback Cary Williams, who had called the Patriots “cheaters” last week. No chippy play between offense and defense, no wasted periods in practice. Just two veteran teams that are quietly confident about their chances of reaching the Super Bowl.

That’s right — it’s been 10 years since the Patriots and Eagles locked horns in Super Bowl XXXIX, with the Patriots escaping with a 3-point win that night in Jacksonville. Only Brady, Bill Belichick, Vince Wilfork, and a couple of Patriots coaches remain from that game, and everyone from the Eagles is long gone.

But it was hard not to be awed by both squads in Tuesday’s joint practice, which may very well have been preview of this season’s Super Bowl in Arizona.

The Patriots we know about — Belichick, Brady, Darrelle Revis, Rob Gronkowski (photo above), and so on. They’re the class of the NFL and always contenders in the AFC.

The Eagles, though, are as impressive a team as you will find in the league, thanks mostly to their second-year head coach, Chip Kelly. The doubts are now gone about whether Kelly can adjust to the NFL game after experiencing wild success at Oregon (and before that, New Hampshire). He took over a 4-12 team last year and turned the Eagles into 10-6 division champions, behind a new quarterback and a shaky defense that didn’t change many pieces.

The Eagles under Kelly look a lot like the Patriots — bigger than one player. No one in Philly seems too afraid about the Eagles unceremoniously dumping star receiver DeSean Jackson this offseason for not fitting in with the team’s culture. They still have LeSean McCoy and Jeremy Maclin and new dynamo Darren Sproles.

And most importantly, they have Kelly running the ship. In Chip they most definitely trust.

“We all knew a lot about him from Oregon, but what we didn’t know is what a great leader he is,” said Lurie, a Newton native and formerly a longtime Patriots fan. “He gets a lot of kudos for his really innovative offense and stuff, and he deserves all that. But I think what people don’t realize is how great he relates to players and his coaching staff, and it’s just very special.”

It’s easy to see why Belichick has been drawn to Kelly ever since his teams were shattering offensive records at UNH a decade ago. Kelly isn’t married to a particular scheme or way of conducting business. He tailored the Eagles’ offense to Nick Foles’s strengths instead of forcing Foles to run the read-option attack that Kelly made famous at Oregon.

Even with the slow-footed Foles at the helm last year, the Eagles gained yards in chunks like no other team. Their ninth-ranked passing attack had the most plays of 20-plus yards (80) and 40-plus yards (18) in the league. And their top-ranked rushing attack had the second-most runs of 20 yards (19) and tied for the most 40-yard runs (five). The result was the NFL’s No. 2 offense in total yards and No. 4 in points scored.

Yes, they had some great players. But their offensive success goes beyond the skill level they have in the huddle.

“I think you have to give Chip a lot of credit for that,” Belichick said. “There are a lot of other teams that have good players, too. They produce more big plays than anybody else, so I think certainly his scheme has something to do with it.”

Kelly, like Belichick, also has no use for the nonsense of modern media. Kelly isn’t nearly as grumpy as Belichick on the podium — in fact, Kelly can be one of the most insightful coaches in the NFL when he gets going — but Kelly sounds like a carbon copy of Belichick when asked about trivial things like the team’s depth chart this early in camp.

Kelly keeps it real, which you’ve got to love. His players certainly do.

“When you get guys like that, that just love to study, love to watch film, love to interact with the players, it makes it fun for the players,” said new backup quarterback Mark Sanchez. “The culture he builds about being a family, not just a team, really selling out for the guy next to you, that’s really important to him. Similar to Coach Belichick.”

The Eagles also hope to have Kelly stick around for a decade-plus, like Belichick has with the Patriots. Lurie had Andy Reid as his coach for 14 years, and legitimately thinks he can get the same kind of run out of Kelly.

“When we went to select the head coach, one of the prerequisites was, who did we think had the capability of being your coach for a decade or more?’ ” Lurie said. “And you never know, but that was our goal, to have that stability. It’s great for an organization. The Pats have it with Bill. It’s just a big plus.”

Belichick and Kelly exchanged pleasantries before practice Tuesday, and went their separate ways. They have their own teams to worry about, and won’t see each other during the regular season.

But no one should be surprised if they meet again in Arizona in February.