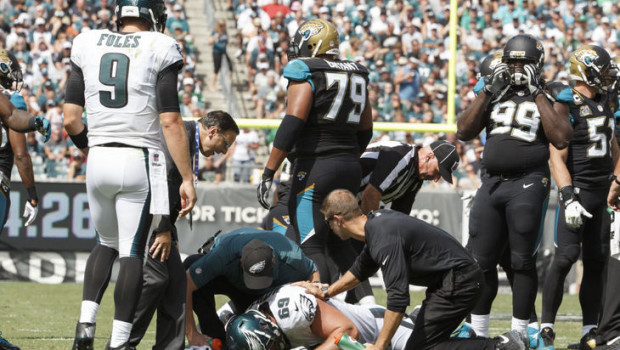 SCRAMBLING EAGLES PATCH UP O-LINE IN WAKE OF INJURIES

So, where does the Eagles’ offensive line go from here?

Last season, the O-line was the most reliable piece of the Birds’ to the NFC East title, and now the team is scrambling.

Tackle Allen Barbre’s season ended Tuesday when the team placed him on injured reserve with a right ankle injury. Pro Bowl guard Evan Mathis (on the ground in photo above) will miss at least the next eight weeks after being put on injured reserve designated return with a sprained medial collateral ligament in his left knee.

Both were hurt in the second quarter of Sunday’s 34-17 victory over Jacksonville.

Smith, 6-feet-4 and 300 pounds, made the Pro Bowl in 2012 after helping Texans running back Arian Foster rush for 1,434 yards. He started 64 consecutive games for the Texans.

Assuming he can learn the Eagles’ offense in time, Smith could wind up starting at left guard next Monday night at Indianapolis. If not, the Eagles will likely go with Dennis Kelly, who was inactive for Sunday’s game, or perhaps David Molk, who filled in against the Jaguars.

With Barbre on injured reserve, Andrew Gardner or Matt Tobin is expected to take over at right tackle until Lane Johnson is finished serving his four-game suspension for violating the league’s substance abuse policy. Gardner replaced Barbre against the Jaguars. Tobin is still recovering from a high ankle sprain suffered during the preseason.

Once considered one of the strengths of the Eagles’ offense, the line is now in shambles. Last season, tackles Johnson and Jason Peters, guards Mathis and Todd Herremans, and center Jason Kelce started all 16 regular-season games and their playoff game against the New Orleans Saints. It now bears a resemblance to the 2012 unit, when Peters missed the entire season with a ruptured Achilles’ tendon and Kelce went down with a knee injury.

In other injury news, linebacker Najee Goode will miss the rest of the season after being placed on IR on Tuesday with a torn pectoral muscle suffered against the Jaguars. The Eagles filled his roster spot by promoting linebacker Emmanuel Acho from the practice squad Tuesday.

Acho, 6-2 and 240 pounds, played in six games for the Eagles last season after being signed off the New York Giants’ practice squad. He will replace Goode as a core special teams player.