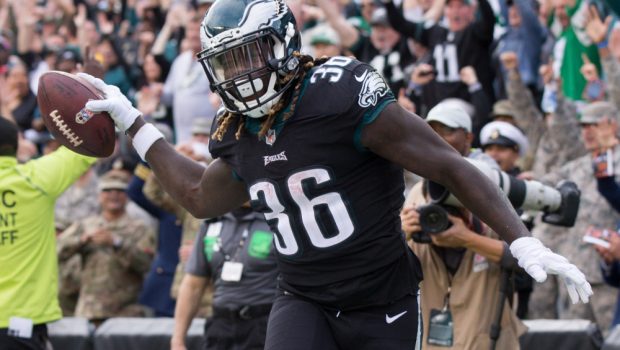 In last week’s loss at Tennessee, the Eagles threw the ball 50 times and ran it only 22.

And in yesterday’s 23-21 loss to the Vikes at the Linc, the ratio was even more out of balance:

No wonder Carson Wentz had a hard time staying upright:

The defense knows he’s going to pass and tees off on him with impunity!

The Eagles’ first carry of the game came with 4:28 left in the first quarter, a 5-yard gain for Wendell Smallwood. The second came from undrafted rookie Josh Adams on a key third-down on the next play. Adams lost one yard.

By the end of the game, Eagles running backs only ran the ball 12 times, gaining 55 yards. Ajayi had eight carries for 29 yards one week after handling most of the workload with 15 carries in a Week 4 loss against the Titans.

“I know the game can get away sometimes and that’s how time works and the game plan and everything,” Ajayi said. “But I think you see what happens when we run the ball. We’re productive. If we can get rolling with that I think we’ll do a good job.”

After that Titans loss, Eagles coach Pederson admitted there needed to be a better run-pass balance. Against the Vikings, after falling into that 17-3 hole, the Eagles had no other choice but to pass the ball, doing so 35 times.

The running game was never able to get into a rhythm.

Of course, Ajayi didn’t help his case when he fumbled the ball away deep in Vikings territory, at the 6-yard line in the third quarter. His turnover led to a Vikings field goal at the other end.

He took responsibility for the turnover.

“I can’t do that,” Ajayi said. “I pride myself on being elite. i want to be elite. I want to be the best. You can’t do that when your team is counting on you. We just had a great drive starting off the second half … I take pride in my craft.”