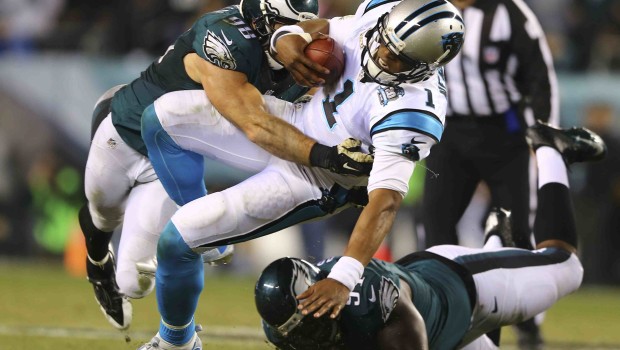 There is a reason the NFL stands for:

That’s because it’s the ultimate “what have you done for us” lately pro league.

Despite winning the Super Bowl, the Eagles (3-3) face the Panthers (3-2), who are also looking to establish themselves as playoff contenders when they play Sunday at the Linc..

”We were fortunate enough to come away way with a victory on the road,” Eagles coach Doug Pederson said about a 28-23 win in a Thursday night game on Oct. 12, 2017. ”This year, it’s no different. Two good football teams. Two aggressive style defenses. So it’s going to have to be a complete game if we expect to win. It’s going to be a really good test for us to see where we are in Week 7.”

Both teams were 4-1 when they met last time. The Eagles already have matched their loss total from last season but they’re coming off a dominating 34-13 win at the Giants on Oct. 11. The Panthers lost at Washington 23-17.

Some things to watch between the Panthers and Eagles:

Panthers wide receiver Torrey Smith was a starter for the Eagles last season and caught a touchdown pass on a flea flicker in the NFC championship game against Minnesota. He said he has no hard feelings over being traded to Carolina after only one season in Philadelphia. Pederson praised Smith’s leadership ability.

”He’s a great leader. Great man, first of all,” Pederson said. ”He brings explosiveness, he can still run, he can still get open.”

The 6-5, 245-pound Cam Newton is difficult to tackle when he runs the ball. He has 208 yards rushing and a team-high three TDs on the ground.

”We have to make sure we do our job,” Eagles defensive end Brandon Graham said. ”If you don’t, that’s when Cam gets out and he beats you. He’s a big boy. You just have to make sure you go get him, bring him to the ground, tackle well. We have to be aggressive but play smart, too.”

Eagles safety Malcolm Jenkins said Newton is ”more of a power running back than half the running backs they have.”