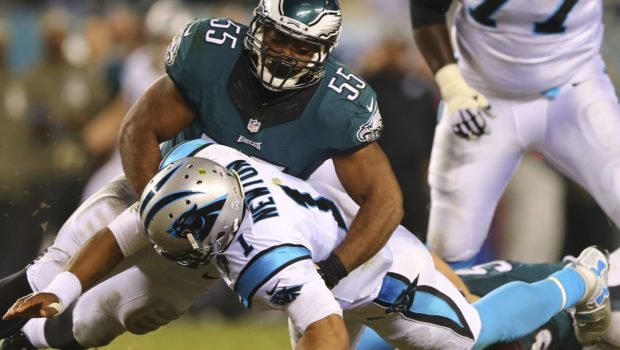 EAGLES-PANTHERS: 4-1 TEAMS THAT ARE CREAM OF NFC CROP!

The Eagles are 4-1, two full games clear of the NFC East, after Aaron Rodger sripped the Cowboys’ hearts out on their home field for the second time in 10 months. Philly’s only loss was to the Chiefs, who are undefeated. The Eagles are 2-0 in the division, 3-0 in conference and sitting pretty. The 2-3 Cowboys have got to find a way to catch them. Washington is at 2-2, and it had the week off.

The Panthers are 4-1. Their only loss was to the Saints, who are 2-2. What does it mean if the Lions, now 3-2 after losing to the Panthers, beat the Saints next Sunday in New Orleans? What does it mean if they don’t? The Lions have got to find a way to win that game, since the Packers keep stacking miracles and sit one game ahead of them at 4-1 in the NFC North. The Vikings might not have to work too hard to find a way to get to 3-2 on Monday night against fresh-faced Mitchell Trubisky in his debut for the Bears.