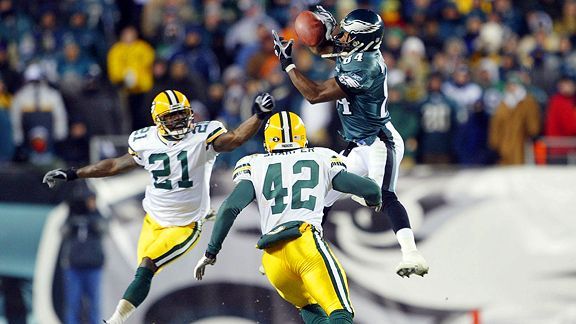 In the second quarter, Donovan McNabb led the Eagles on a scoring drive, completing five consecutive passes for 77 yards, including a 45-yard pass to Todd Pinkston. On the last play, his 7-yard touchdown pass to Duce Staley cut the deficit to 14–7. Green Bay took the kickoff and drove 67 yards to the Eagles 1-yard line, featuring a 33-yard run by Green, but on fourth down, Green was stuffed by DE Jerome McDougle and LB Mark Simoneau for no gain. The Packers turned the ball over on downs.

Late in the third quarter, the Eagles drove 88 yards in 8 plays to tie the game, despite two 10-yard penalties against them on the drive. McNabb was responsible for all of the yards on the drive, rushing for 37 yards and completing four passes for 72, including a 12-yard touchdown pass to Pinkston that tied the game at 14 on the first play of the fourth quarter.

Later, Antonio Chatman’s 10-yard punt return gave the Packers great field position on their own 49-yard line. On the next play, Favre threw a 44-yard completion to Javon Walker. Philadelphia’s defense kept Green Bay out of the end zone, but Ryan Longwell kicked a 21-yard field goal to give them a 17–14 lead.

On fourth down, the play (74 Double Go) called for a 25-yard slant route for wide receiver Freddie Mitchell.

McNabb threw a perfect strike to Mitchell deep into the Packers’ secondary.

The play set up David Akers’ 37-yard field goal attempt after McNabb ran for another first down. The field goal was good, and the game went into overtime, when Eagles star safety Brian Dawkins was able to intercept an errant Brett Favre pass and return it 35 yards, setting up another Akers field goal try. The 31-yard kick was good, giving the Eagles a dramatic 20–17 victory in sudden death overtime. The play helped send the Eagles to their third straight NFC Championship Game.