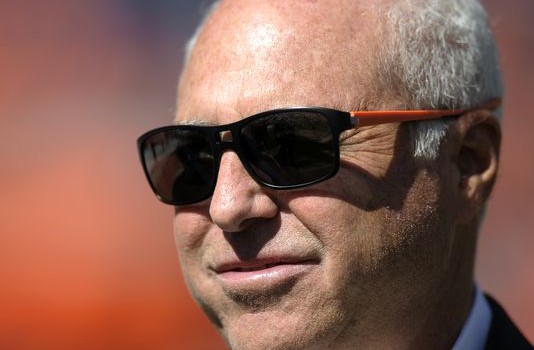 EAGLES OWNER JEFF LURIE: FOLES HAD A GREAT YEAR HERE IN 2013 AND THIS TEAM IS BETTER!

Eagles owner Jeffrey Lurie doesn’t make many public comments about the team, so it was refreshing to see him quoted extensively by NFL.com:

“We’ve seen Nick be very good,” Eagles owner Jeffrey Lurie said this week. “And that year, 27 touchdowns, was no fluke. This is a better football team than that team. He’s surrounded with a better team now than when he was with us before. So, we have a real resilient group of guys and I know we’ll play hard and I think we’ll play well. And shoot for the No. 1 seed if we can get it.”

In 2013, under Chip Kelly and before he was traded for Sam Bradford, Foles had a 64-percent completion percentage, 27 touchdowns to two interceptions and a 119 passer rating. He appeared to be a star in the making. Instead, it started an odyssey that sent him to the Rams, the Chiefs and back to Philly.

At 11-2, with a division title and playoff berth clinched, the team had the highest of expectations with Wentz. Lurie said that hasn’t changed.

“No, it really hasn’t. You have that initial worry,” Lurie said. “We lost Jason Peters, it was like, ‘Oh my god. How we going to protect the quarterback? Ugh, we lost Darren Sproles. How are we going to have any kind of receiving game out of the backfield and blitz protection.

“Ugh, we lost our play-caller on defense,Jordan Hicks. How are we going to manage? Jeez, our special teams were good but we lost our best special teams player, [Chris] Maragos. We just got to have the same attitude, exact same approach.

“We’ve planned for having a really good backup quarterback who I think is capable of being a good starter in the league,” Lurie continued. “We just got to go for it.”

“We purposely invested a lot in the backup quarterback position,” Lurie said. “Nick was a Pro Bowl player for us. He’s a great guy with a lot of talent.”

“No doubt, [Pederson] was talking to the team,” Lurie said. “We’ve got a great group of guys, a great locker room culture. They are in a great position, 11-2. They love Carson and they love Nick and now we just going to have to do it with Nick. We see him every day in practice and we’ve got a very special player in Carson. Now we have to do with a guy that we have a lot of confidence in in Nick.”