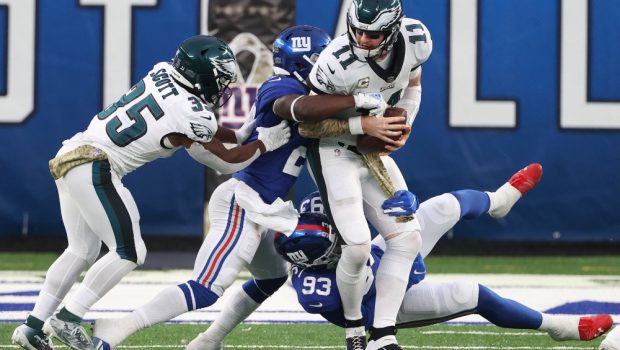 EAGLES OVERPAID, OVERRATED WENTZ: GIANTS MADE IT HARD ON US!

After losing 27-17 to the Giants yesterday, Eagles quarterback Carson Wentz sounded like an outside observer instead of an overpaid, overrated quarterback.

He was 21-for 37 for 208 yards — 60 of them to tight end Richard Rodgers — and he finally stopped turning the ball over: no picks or lost fumbles.

“I knew we struggled on third down, I didn’t realize we were that poor,” Wentz said. “Anytime you’re 0-for-9 you’re obviously not doing something very well. Hats off to them. They had a good game plan. That’s a good defense over there. They made it hard on us. It’s extremely frustrating.”

Wentz indicated he thought the story of the game was more that the Giants’ defense played well than that the Eagles’ offense played poorly.

“We don’t go into a game thinking we’re going to struggle like that and go 0-for-9 on third downs and only put up a couple points,” Wentz said. “But I’ve got to give a lot of credit to that defense. I thought we had a good game plan ready to go. They made a lot more plays than us and we didn’t deserve to win.”