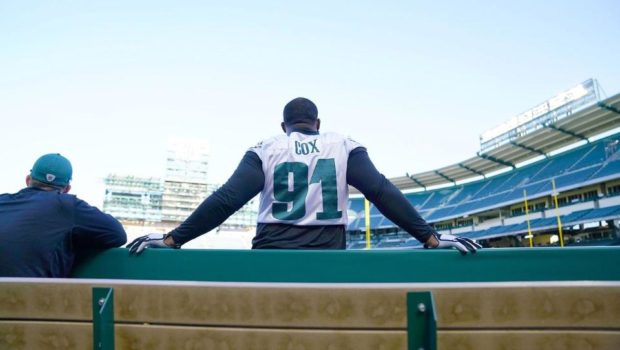 EAGLES IN THE OUTFIELD! PREPPING FOR THE RAMS IN ANAHEIM!

The Eagles have taken over Angels Stadium in Anaheim as they prepare for the Rams this Sunday.

They flew south from Seattle on Sunday and, as an added bonus, coach Doug Pederson explained, “You get a chance to be in the sunshine a little bit.” In Philly the projected highs are in the low 40s.

Though Eagles quarterback Carson Wentz and Angels superstar Mike Trout have built a relationship centered on the Eagles, not everyone on this team claims to be close to the Angels outfielder.

“I have to be honest,” receiver Nelson Agholor admitted, “I’m not much of a baseball fan.”

Even in a season during which Wentz has emerged as an MVP candidate, perhaps no player better embodies the Eagles’ 2017 rise than Agholor, the former USC standout finally showing why he was a first-round pick.

In his third year, Agholor is thriving as an explosive option coming out of the slot, a place often reserved for pass-catchers better known for their sure hands than their swift legs.

He already has set career highs in receptions (40), yards (599) and touchdowns (seven), Agholor’s success the result of a sharper confidence and a clearer head.

“Mentally, I can put myself in a storm,” he explained last season. “But I need to jump out of the storm.”

In October, moved by Agholor’s performance, former NFL receiver Chad Johnson addressed Eagles fans on Twitter, writing, “You ain’t seen nothing yet, it gets real scary when confidence kicks in.”

Agholor began to remake himself in the offseason, going so far as to change his jersey number from 17 to 13. Who knew dropping four digits could lessen a weight he evidently had been feeling?

“For me, it was just having the confidence in him, the trust in him that he was going to be the receiver the Eagles saw (coming out of USC),” Pederson said. “That’s what he’s proven to be. (He’s) playing with a lot of confidence right now.”

As are all the Eagles, who represent a franchise that hasn’t won a playoff game since January of 2009, when Philly reached the NFC title game and lost to Arizona, the Cardinals at the time being quarterbacked by Kurt Warner.

Seriously, it has been that long, the gap large enough that since then Warner has been elected to the Hall of Fame and the Eagles have employed seven different starting quarterbacks, including Kevin Kolb and Vince Young.

These latest Eagles are 10-2, tied for the best record in the NFL and coming off their first loss in nearly three months.

“It’s a blessing to get a chance to be back here,” Agholor said. “I look forward to just having fun with my brothers and introducing them to the stadium and making plays there again.”

From a baseball park to a college venue, Agholor and the Eagles would love to pull a Mike Trout this week, go deep and then trot through a victory lap that doesn’t end until they finally reach home.