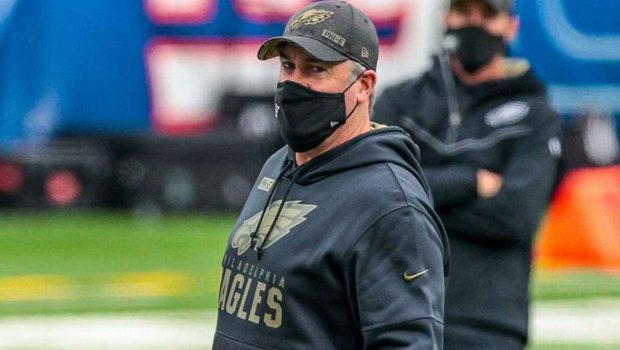 EAGLES ON THE CLOCK — TIME FOR DESPERATE DOUG PEDERSON TO GO!

Eagles coach Doug Pederson is so far in over his head in his job that it was hard not to come to that conclusion.

Even Pederson thinks so.

Which is why he has spent the past five days and nights on a thinly veiled PR tour trying to save it!

You couldn’t turn on a TV or radio or peruse the Net and miss Pederson’s message.

Let me fix this team!

I apologize to the fans!

And he has had an audience of one:

Because of it were up to us Pederson would have been axed weeks ago with Duce Staley named as interim.

But that’s just us.

The Eagles ar 4-10-1 with an offense that ranks in the bottom third in the NFL in points per game (21.3) and passing yards (215.3 per game), and franchise quarterback Carson Wentz regressed from MVP-caliber to bottom-of-the-league bad.

“Really my confidence lies in myself, that I know exactly how to get things fixed,” said Pederson, who earlier Monday said he “fully expects” to return as coach in 2021. “We’ve won a lot of games around here. Been in the postseason three out of the five years I’ve been here and a championship and all that. I’ve seen it, I’ve done it.”

Pederson has embraced Lurie’s analytics-fueled approach to the game and weekly in-depth meetings with Lurie and general manager Howie Roseman to discuss all things football. Pederson has respected the line between coaching and personnel decisions, leaving Roseman and his staff to their expertise while focusing on his own.

Lurie wanted to add coaches with fresh ideas to revive a sagging offense and was involved in that search along with Roseman. Lurie wanted USC offensive coordinator Graham Harrell, ESPN’s Tim McManus reports, but was unable to land him. The Eagles ultimately went without an offensive coordinator and hired Kyle Shanahan protégé Rich Scangarello as senior offensive assistant, Andrew Breiner as pass game analyst and Marty Mornhinweg as senior offensive consultant, and elevated quarterbacks coach Press Taylor to pass game coordinator. The mix struggled to mesh, no identity was formed on offense, and the many voices too frequently caused a cacophony for Pederson and Wentz.

Pederson’s frustration this season has been evident, and some close to him suspect it is related in part to the front-office dynamics. That would add to what was described to ESPN as a growing frustration among some members of the Eagles’ staff that their evaluation of players is not being weighed heavily enough in personnel decisions.

Pederson, 52, was asked Monday if he would like more say in player talent acquisition.

“I don’t necessarily want to cross that line because it takes you away from doing your job as the head football coach. I like being on the football side of things as a former football player and obviously now a coach. That’s where my passion lies. But yet, I want to be part of the solution. I want to help evaluate and help bring guys in here that can help us win.”