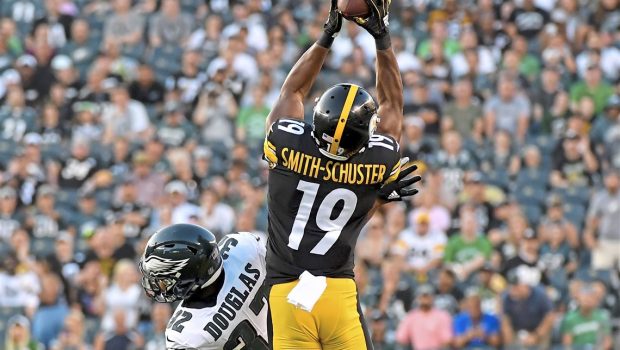 JuJu Smith-Schuster has re-signed with the Pittsburgh Steelers.

ESPN’s Adam Schefter reports that the Baltimore Ravens made a hard push to sign Smith-Schuster and that the Eagles also offered a multiyear deal with more money but that Smith-Schuster wound up taking significantly less money to stay with the Steelers on a one-year deal.

A source told ESPN’s Field Yates that Smith-Schuster’s $8 million contract with the Steelers has a $7 million signing bonus, $1 million base salary and four void years. The contract’s structure will result in a $2.4 million cap hit in 2021 and a $5.6 million cap hit in 2022, ESPN’s Dan Graziano reports.

In this case, JuJu Smith-Schuster’s agent called the Eagles to gauge their interest; those were the discussions. The Eagles did not wind up courting him. JuJu back to Pittsburgh, which was what he wanted. https://t.co/IWTvGIfzxs