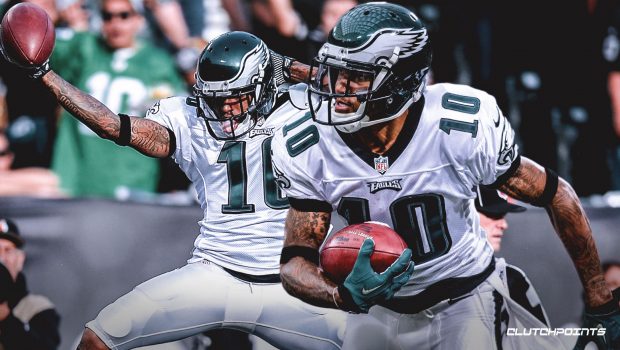 EAGLES OFFENSE IS SO DEEP AND SO TALENTED!

In case you hadn’t noticed, the Eagles are being hyped by everyone in the national media for big things in 2019:

Maybe even another Super Bowl title.

And no one is higher on the Birds than ESPN’s Bill Barnwell, who ranks the offense 4th-best in the NFL:

I don’t think anybody is deeper at the skill positions across the board than Doug Pederson’s team.

If you took away their best player at each position, you could still roll out a starting five of Miles Sanders, Nelson Agholor, DeSean Jackson (above), JJ Arcega-Whiteside and Dallas Goedert. You would probably prefer that to the Jags’ starters.

Down the stretch last season, the Eagles started Josh Adams and then Wendell Smallwood at running back; it’s not clear whether either back will make the active roster. No team has this sort of depth.

Outside of Zach Ertz, though, it’s fair to wonder whether there’s the sort of top-level talent we’re seeing from the other teams in this top 10.

Alshon Jeffery hasn’t been healthy for a full season since 2014, though he did make it through the full 16-game season in 2017 with a torn labrum. Jeffery is unquestionably tough and has been a brutally tough out in the playoffs — aside from the drop against the Saints — but he also hasn’t hit 850 receiving yards in a season in four years. The running back rotation has plenty of interesting options, but there’s no guarantee that Miles Sanders steps in and hits the ground running as a rookie back. The sum adds up to more than the individual parts here.