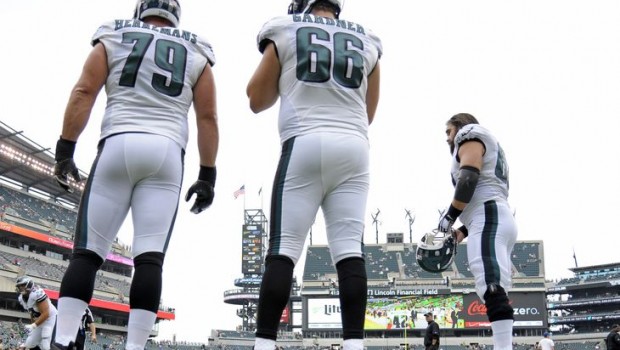 EAGLES’ O-LINE WILL GET ITS UMPTEENTH NEW LOOK THIS SUNDAY

Injuries to the Eagles’ offensive line has been blamed for all the Birds’ ills, ranging from Shady McCoy’s subpar season at running back, QB Nick Foles’ happy feet and turnovers and everything else under the sun with the possible exception of Cary Williams’ big mouth and small-time performance.

Now, the O-line is essentially intact, though Todd Herremans is out for the season with an arm muscle tear.

Though it must be said that returning from surgery isn’t a wam-bam proposition, which may explain why Jason Kelce and Evan Mathis are just rounding into playing shape.

Coach Chip Kelly said that right guard Matt Tobin suffered a concussion near the end of last Sunday’s loss to the Packers. Tobin, who took over the starting job after Herremans was lost for the season, hasn’t been cleared through the league’s concussion protocol at this point, leaving him questionable at best for the Tennessee game.

The Daily News reports that Andrew Gardner (photo above) took first-team reps in Tobin’s place during the portion of practice open to the media. Dennis Kelly is also a possibility for the job if Tobin isn’t able to play.

Whoever plays, Kelly said they need to be ready for an attacking defense.

“These guys will play Cover Zero,” Kelly said. “That’s something you have to prepare for.”

Quarterback Nick Foles was the only other Eagles player not practicing on Wednesday.