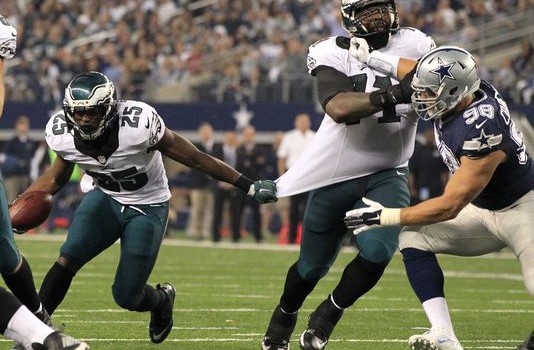 EAGLES’ O-LINE IS THE MAJOR REASON FOR THEIR RECENT DOMINANCE

Jason Peters gives Shady McCoy the shirt off his back against Dallas.

If you are looking for one overarching reason for the Eagles’ recent elevation to a dominating team, the offensive line is the answer

Jason Peters, the only player to start all 12 games, is the left tackle.

Evan Mathis, who missed seven games with a knee injury, is the left guard.

Jason Kelce, who missed four games with a core muscle injury and surgery, is the center. Andrew Gardner, who played two games early at right tackle, is the fourth, and the Eagles hope final, right guard. And Lane Johnson, who was suspended the first four games for violating the NFL’s policy on performance-enhancing substance, is the right tackle.

”I just think there’s a continuity,” Eagles coach Chip Kelly said. ”The same guys are playing next to the same guys and communication has been better. As a group, they’ve gotten the chance to line up next to each other for a few weeks and that’s one of the reasons and also, Jason (Kelce) is healthier and Evan (Mathis) is healthier, so that helps.”

From the start of the season when Johnson was suspended, the Eagles have never been able to put their five preferred linemen on the field.

That would have been Peters, Mathis, Kelce, Todd Herremans and Johnson.

Not only that, but even the backups got hurt.

Allen Barbre, the team’s ”sixth man” went down in the season opener, as he filled in for Johnson at right tackle, with a season-ending broken ankle.

”We’ve been through a lot of changes,” Peters said. ”Guys up, guys down, it’s not easy. But the other guys played hard and we won games. Now, we’re getting most everyone back and there’s that sense of continuity again.”

In 2013, Kelly’s first year as head coach, he had all five linemen start all 16 games and the playoff game against New Orleans.

Now, as the team reaches its stretch drive to repeat as division champions and advance in the playoffs, the line is starting to get that feel back.

”I feel pre-injury healthy,” Mathis said after the win over Dallas. ”My conditioning is up to par. … I think we’re just getting better and better at hitting the blocks, playing as a team more so and more so every week. We’re blocking better up front as five offensive linemen, with the tight ends, the wide receivers and the backs are hitting the holes. We’re just trying to grow each week as a team.”