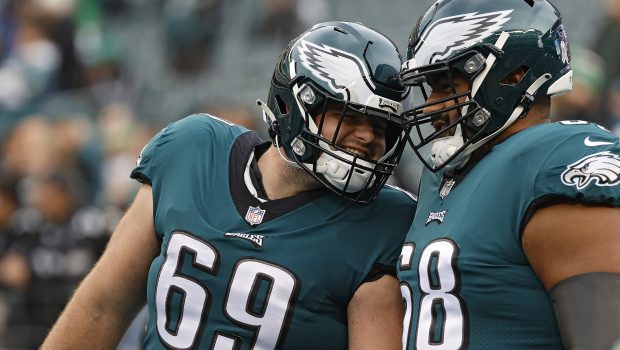 EAGLES O-LINE IS THEIR STRENGTH, SAFETY STILL A WEAKNESS!

And Pro Football Focus has assessed where they stand:

If they don’t have the best offensive line in the NFL entering the 2022 season, the Eagles are near the top of the list.

Jordan Mailata emerged as one of the top young left tackles in the league last season, ranking second (behind only Trent Williams) in PFF grade (91.2) when lined up there.

In addition to Mailata’s development, Lane Johnson remains one of the league’s top right tackles entering his 10th NFL season, and center Jason Kelce is coming off a first-team All-Pro appearance in 2021.

The James Bradberry addition alongside Darius Slay and Avonte Maddox eliminates a lot of the questions surrounding the cornerback position, but safety remains a potential weak point on defense.

Anthony Harris has earned two consecutive sub-70 PFF grades after being one of the highest-graded safeties in the league across the 2018-19 seasons in Minnesota.

The Eagles will be relying on Harris, K’Von Wallace, Marcus Epps and and recent addition Jaquiski Tartt to elevate their play in 2022.