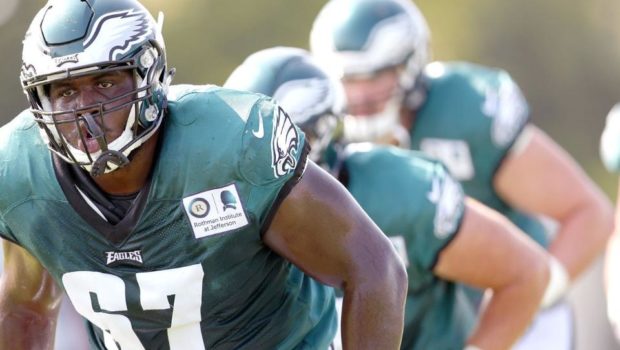 As the Eagles prepare to play the Miami Dolphins tonight at the Linc, let’s face one immutable fact:

Carson Wentz, the golden boy second-year quarterback, will only be as good as his offensive line lets him!

While much of the offseason moves involved stopping the largest leaks at corner back and wide receiver, the offensive line was rarely touched despite not having as much depth as a typical NFL season requires.

Trades for Allen Barbre and Matt Tobin got a return in value for players the Eagles didn’t think produced the same benefit on the field.

Re-signing Stefen Wisniewski to a three-year deal and signing Chance Warmack (above) to a one-year deal highlighted the offensive line additions.

With Isaac Seumalo presumably moving up to a starting role, Josh Andrews, Halapoulivaati Vaitai, and Wisniewski and Warmack make up a strong back up group of experienced linemen.

Pro Football Focus has the Eagles as having the best offensive line entering the 2017 season.

For as much hype as there is around the depth and confidence Frank Reich confides in the offensive line, they’re not impervious to stumbles. The Eagles were 2-8 last season without Lane Johnson and 5-1 with him. Jason Peters was the third most penalized offensive lineman in the league last year, while the line as a whole was tied as the second most penalized in the league (26).

If the offensive line is to be touted as much as we think, the struggle of the running game becomes something of a mystery. Short dives into the line, porous sweeps, and minimal downfield blocking were constants last season and continue in this preseason. The sample sizes for this season are small, but Donnel Pumphrey’s .3 yards per carry and LeGarrette Blount’s 1.9 per carry are ugly numbers that undoubtedly contribute to the buzz of the possibility that Blount won’t make the roster.

Pass blocking will be more essential this season with the addition of big receivers. While the Eagles are still working out kinks for the regular season, Carson Wentz has had his fair share of scrambles, rushes, hits, and sacks. All of the blame can’t fall on the offensive line for poor rushing and a rushed passing game, but stability in the line is something to watch for the remainder of the preseason and into the early weeks of the season.