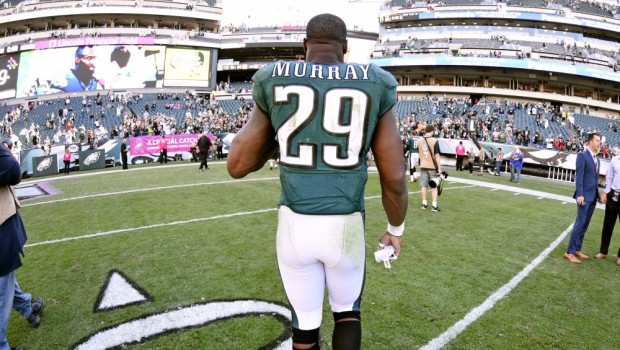 EAGLES’ O-BOSS EXPLAINS WHY DEMARCO IS 4TH ON DEPTH CHART!

Pat Shurmur did his best yesterday to shine up the situation running back DeMarco Murray is in on the Eagles’ depth chart:

The Eagles’ offensive coordinator tried to explain his big-bucks running back’s benching, but no one was buying it.

“We have what we believe to be four really good running backs. So we want to use them all,” Shurmur said Tuesday. “If you put a really good player in the game and he’s fresher as you go, then you get a little bit more out of him.”

Murray led the league in rushing last year as a member of the Dallas Cowboys, with 392 carries, and got a five-year $40 million contract from a team he might not necessarily fit on.

Murray’s averaging 3.5 yards per carry, compared to 5.3 for Ryan Mathews, 4.0 for Darren Sproles and 4.6 for Kenjon Barner.

“When you have a featured back, and that’s the unintended consequence of saying you only have one guy, then that guy takes a lot of pounding and a lot of wear and tear,” Shurmur said. “When I was in St. Louis, we had Steven Jackson. He was our featured back. But he was also by far our best running back. He was a dynamic, explosive player.”

Murray hasn’t proven himself to be their best running back, even though he’s their most expensive and most previously accomplished one.

“We’re trying to win football games and we want to put fresh running backs in the game. Period. End of story.”