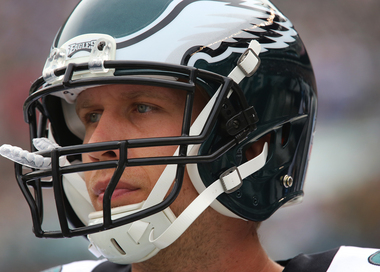 EAGLES' O-BOSS: 'WE'RE 4-1 AND FOLES HAS BEEN THE STARTER THROUGHOUT'

While every airhead on radio is questioning Nick Foles’ competence as Eagles quarterback, and even national media types are wondering what happened to the Foles of 2013 who threw for 27 regular season TDs and only two picks, the only man that matters is four-square behind the Birds’ QB.

“We’re 4-1 and he’s been out starter throughout,” Eagles offensive coordinator Pat Shurmur said Tuesday when asked to evaluate Foles’ performance against the team’s fast start.

“So, that’s the overriding judgement. Beyond that, he’s our starter. We don’t judge him so much that we coach him to get better, that’s sort of how we approach it.

“I saw Nick battle through the game [Sunday]. We haven’t been giving up sacks the last few weeks. There have been times he had to get rid of the football in a little quicker manner than we like, there are times when he’s had some bad footing.

“I think people get hung up on the 27-2 [touchdown to interception ratio last season] a little bit but we’re a different team. We have different players in there, we’re facing different defenses, and we’re grinding through it. I think that’s a cool thing. We’re sitting here getting ready to play the Giants in our sixth game with a chance to be 5-1 and I think that’s what you build on. It’s not always pretty and that’s the really cool thing about our sport, you have to grind it out.”

Shurmur though says he and the coaching staff aren’t sounding any alarm bells, especially since All-Pro caliber interior linemen Jason Kelce and Evan Mathis are sidelined until at least November.

However one area of concern that showed itself repeatedly Sunday were throws into traffic that were perhaps ill-advised on Foles’ part that could have led to even more interceptions than the five he has already thrown this season. Those throws seem to be a recurring issue on the heels of a season where Foles not only completed 65 percent of his passes but also excelled at manipulating defenses which hasn’t been the case this season.

Then there are the throws that Foles has missed. Whether it’s his ineffectiveness either under-throwing or overthrowing receivers deep or passes like the one he bounced in front of a wide open Jordan Matthews that would have been a touchdown.

Shurmur said Tuesday that what he’s seeing out of his quarterback is typical of play out of the position league-wide this season.

“I was watching games in the afternoon where they did something that made me say “wow” and they turn right around and make a good throw.” He said.

We have yet to see a complete performance from Foles this season and Sunday night’s NFC East showdown with the New York Giants, who rank 25th in the league and allow 250 yards per game not only is a prime opportunity to finally see it, but perhaps also a necessary one with first place at stake.