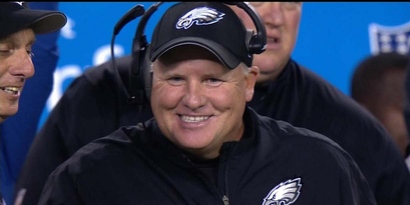 The Eagles and Chip Kelly are riding the galloping horse of history, and once the Bucs draft Jameis Winston tonight with the first pick, it’s becoming harder not to imagine the Eagles leaping from No. 20 to No. 2 to get quarterback Marcus Mariota.

And that opinion is from Mike Florio of ProFootballTalk.com

In the second and final mock PFT draft of the mock-draft season, the trade was included. The sense that coach Kelly would give up plenty to get the one sure thing he sees in this (and perhaps any) draft continues to gather momentum, with more and more veteran players reportedly available to be sent elsewhere and with the Browns reportedly believing they can finally get quarterback Sam Bradford.

The brilliance of the maneuver, if it happens, was the Bradford trade. The Eagles gave up quarterback Nick Foles, a fourth-round pick in 2015, and a second-round pick in 2016 for Bradford. (They’ll get back a fourth-round pick from the Rams if Bradford doesn’t start at least eight games, and a third-round pick if he ends up on injured reserve before Week One.) That’s a fairly large sacrifice to get a guy who ultimately would become a piece of the Mariota puzzle, but having Bradford to send to Cleveland becomes the key piece in giving Tennessee a first-round selection for 2015 significantly higher than pick No. 20.

So with the Bradford (and likely more) going to Cleveland for the No. 12 selection (and possibly Johnny Manziel), the Eagles can package No. 12 with No. 20, a first-round pick in 2016, and whatever else it takes to get Tennessee’s attention — including one or more of the veteran players who reportedly are available, includingMychal Kendricks, Vinny Curry, Brandon Boykin, and/or Fletcher Cox.

It doesn’t mean it will happen. But it clearly shows that the Eagles will try to get there. In about 12 hours, we’ll know if they did.

Until then, we know Chip Kelly has the power to do whatever he wants. What’s the point of having that power if he doesn’t use it to get the one guy who can run his offense the way he wants it to be run?